A spark of new in front of the old - Mailbox Revealed!

We last left off with a completed mailbox. Now it was time to figure out how to mount it out front.

We already had a post from the old mailbox and since this was ultimately going to be a temporary (albeit long-term temporary) solution, I saw no reason why we couldn't just re-use that.

First thing, we needed to make sure that our new mailbox would fit properly and that we wouldn't have any issues mounting it. We attempted a dry fit and discovered that the length of the arm that it would sit on needed to be cut down.

We took everything to the back yard to make our modifications and so I could also start painting.

After we had to cut it down a second time (I forgot to take into account the space needed to let the door open... oops!) we realised that the arm was not wide enough to accommodate the four screw holes in the bottom of the mailbox so there was no way to secure it to the wood.

Luckily we had a piece of scrap wood left over from the temporary bracing Jake had erected in the basement that we could use. It turned out to be the exact width to fit snugly under the mailbox which was great because it was a holiday Monday so the stores were all closed and we wouldn't have been able to buy something else.

After we got everything cut, Jake went off to mow the lawn (desperately needed, thanks mom and dad for letting us borrow your push mower this season!) while I got to work on "making things look pretty".

The backing that the numbers were screwed into was incredibly weathered and since I was going to paint it all, I needed to scrub it down to get rid of all of the fuzzy pieces or my paint job wouldn't last.

I brought over my trusty scrub brushes that I had purchased to clean my urns back in the spring and got to work. 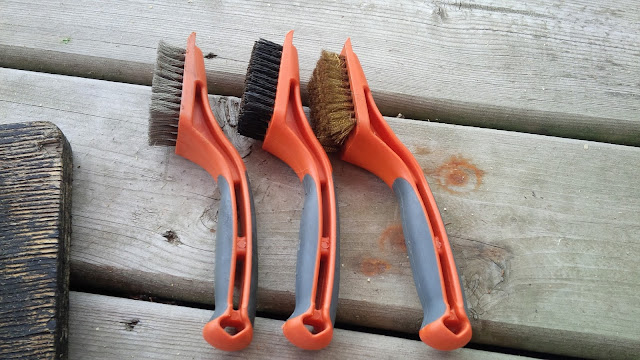 Turns out that the wood was in worse shape than I thought and needed a proper sanding. We don't have any power at our house right now (it's very comforting knowing you can smash up walls without having to fear being electrocuted) so we made the decision that we'd have to go to Jake's parents and ask to use their rotary sander. Needless to say, this piece just got set aside for us to deal with later and I moved on to painting everything else.

Since Jake is the paint guy, he picked up some exterior paint that we could use for this project as well as at least one other that he has on the go. We chose do do a matte black finish for that very reason; multi-use.

I also wanted to use a paint brush instead of spray paint so that I could just paint the post where it stood. It was a way of ensuring I could paint every side at the same time instead of the typical "wait for it to dry and then turn it over" that was used for the other pieces. 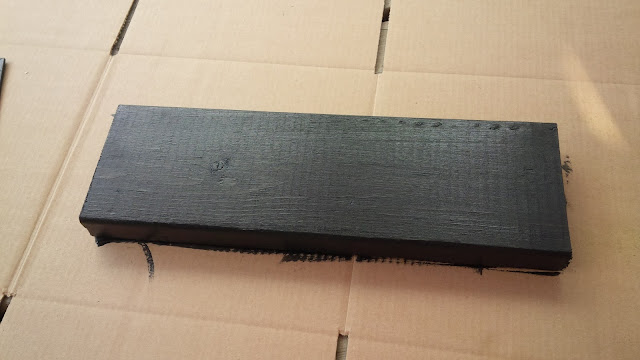 To mimic the mailbox itself, I decided to paint the numbers white. I put the first coat on and then went out front to paint the post and when I came back to do the second coat on the numbers I discovered this:

Jake had blown a bunch of grass clippings onto the deck while he cut the grass and a good amount got stuck to the wet paint. No big deal, I'd just let it dry completely and then sand the grass and dirt away and reapply. But I definitely brought it to his attention (I gave him heck, but we both laughed about it).

It was so warm out that we were able to get the numbers done that day even with the grass issues. I think Jake may have felt a little bit bad about it, because while I was doing other things in the house, he went out back and took care of the numbers.

After doing some work in the living room we called it quits for the day. We took the number board home with us and Jake tried using his hand planer and that was working until it started to rain and he had to come inside.

So the next day, after work we went to Jake's parents and used the sander. The final results were awesome. It was so smooth to the touch! 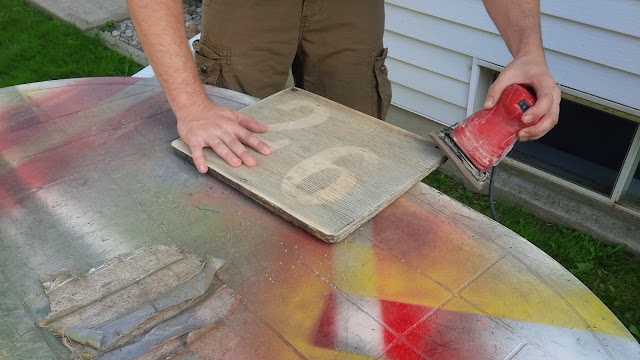 I put a second coat of paint on everything and two coats of paint on the number board that night, knowing I'd be able to put it all together the next day.

So the next day, straight after work, I ran quickly to my parents farm to get some screws to mount the actual mailbox, then to the house to quickly paint the back side of the number board. Then I went home to eat dinner and get changed before going back, giving it some time to dry.

Finally the time had come to put it all together!! 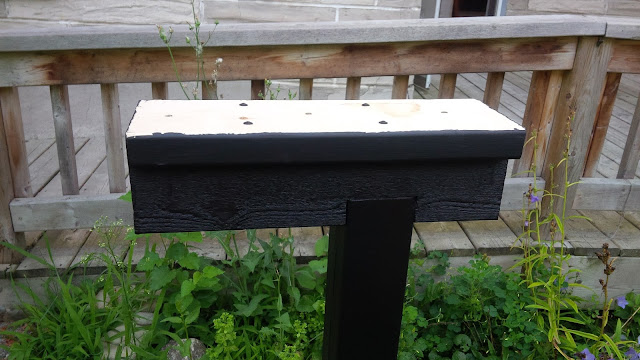 I used three screws to attach the mounting board and then drilled the four screws that would hold the mailbox in place. This was done so it would be easier to screw them in using a swiss army knife and the limited space inside the mailbox, similar to what a pilot hole does.


Since we didn't want the back door of the mailbox used at all, we opted to mount it right up against the edge of the wood so the door could not even open. This meant that I had to screw in all four screws from the front door which was less than ideal, but oh well!

After mounting the numbers back onto their board, I held it up to attach it. I had intended to just re-mount it in exactly the same position, using the same holes but came across a little issue.

Because we had cut down the arm, the original screw hole on the right side was missing. I was super confused for a moment and even went through my phone looking for pictures of the old mailbox to figure out how it was mounted before realising what had happened. I decided then and there to just use the left hole and bottom hole and then just move the screw to the left on the right side.

Jake had to work that evening so he wasn't with me when I put it together. As soon as I saw him I explained what had happened and showed him the finished product.

He took one glance and said "don't you think that should all just be lined up?"

Looking at it again I realised he was absolutely right. It looked weird the way it was.

So the next day, I took the board off again and moved it left to line up with the right side of the mailbox. Doing so ruined some of the paint however (because the back side of the number board was painted the same evening it was mounted). Again, not a big deal. I wanted to paint over the screws anyway. 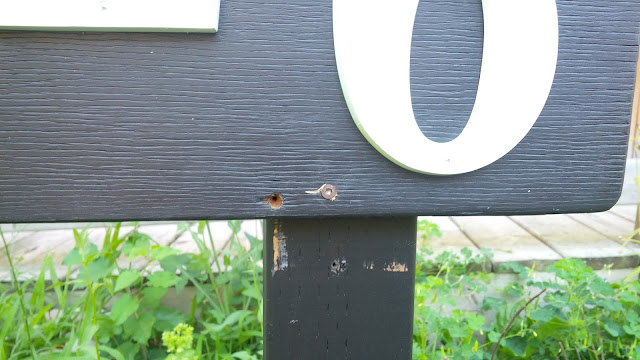 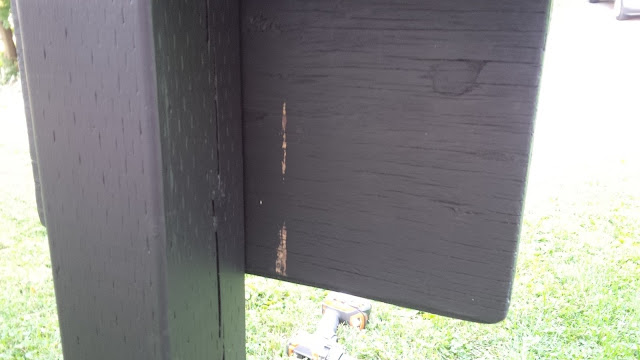 I decided to move the number board up as well, attaching it to sit tight underneath the mailbox. I think it looks much better.

After the painting touch-ups we officially have our final product!

We went from this:

To this:
What do you think?