In the midst of chaos, there are easier projects to do

We are currently in the middle of taking down all of the plaster.

I'm sure I just made a lot of old house purists gasp in shock and horror but the simple fact is that I hate the stuff. First, we need to take it all down so that we can re-do all of the electrical and better insulate the house. Second, I know that the point of it is to have that "imperfect" character, but I hate walls that aren't smooth. I hate seeing little bumps and waves. That is not my idea of a nice looking wall/ceiling.

Plus there is great comfort in the fact that if, down the road, we need to change something else it will be a bajillion times easier with drywall than it would be with plaster.

So down it all comes!

This post is not about taking down plaster though. I'll go into detail on that at a later date.

No, this post is about the project I've taken on in order to make me feel better about this renovation (I've been covered in plaster dust for almost two weeks now. Insert sobbing here).

Shortly after our offer got accepted, we decided that it would no longer jinx us if we showed our family and friends pictures. Without fail, one of the first things they'd say is "Oh! What an adorable mailbox!" 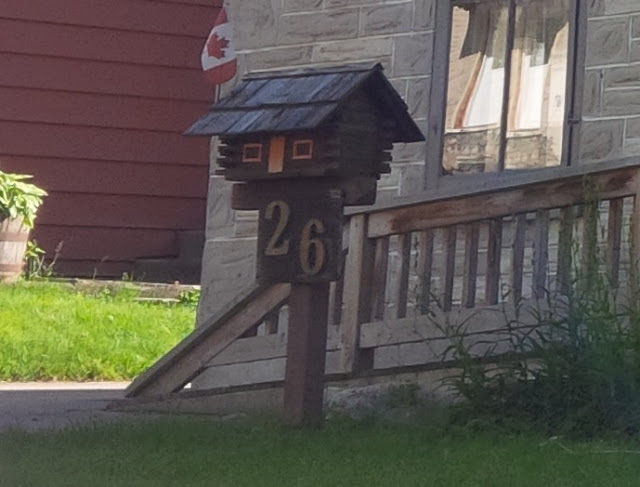 And it definitely was adorable. However it wasn't quite to our taste, so when we got word that the seller's daughter wanted to keep it because her father had made it before he passed away I thought "perfect!! It will go to someone who truly values it AND I can do something different for a mailbox."

We  told the seller's agent that we were more than willing to allow them to keep it and to let us know if there was anything else that held sentimental value that they wanted.

So began our hunt for a mailbox.

Did you know that nice looking mailboxes aren't cheap? Especially ones that go on posts. And ESPECIALLY when you have my gift of falling in love with something only to learn it's the most expensive thing in the store.

I scoured the internet for something that suited the style we were going for with this house and was further determined when we saw this beauty in Southampton:


I knew they existed. I just didn't know where I could get one without paying an outrageous price.

So I decided to shift gears and go with something that looks good but won't break the bank. And then in the years to come we can keep our eyes open for what we actually want.

We searched around town and eventually found this rural mailbox at Canadian Tire for less than $20 (I can't seem to find the one we bought in-store on their website but I'm pretty sure it was $17-something).


Then I went on etsy.com and searched for "mailbox vinyl decal" and looked through until I found something I liked. I ended up picking one from this seller. Because I wanted two of the decals (one on either side of the mailbox) and because the Canadian dollar isn't doing so hot against the American dollar, it ended up costing me $34.76. The mailbox itself was so cheap though that I didn't think the cost was high in comparison to the impact it would make.

One night last week I decided to put the mailbox together. After showering all the plaster dust off of me, I sat down at the coffee table to get to work while Jake took Seamus out for a walk.

These are the decals I purchased plus the little scraper tool that came with them: 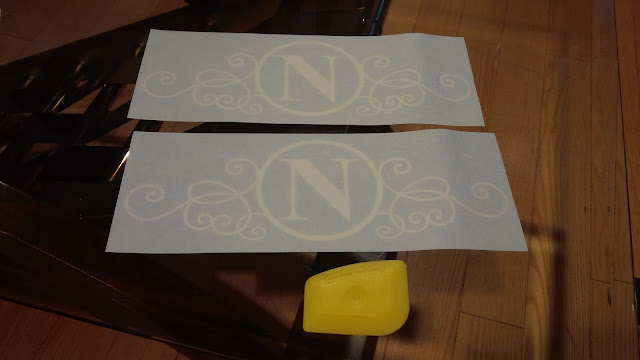 First, I measured the mailbox and figured out where the decal would go. This was a little bit of trial and error as I had to fix the original placement when I took a step back and it looked too low. I marked the bottom corners in pencil after making sure the distance from the sides and bottom were accurate.

Next I taped the decal in place.

Next, following the great instructions that were provided to me, I put a long piece of tape down the middle of the decal.

Then I peeled the right corner and cut a piece of the bottom layer away. I smoothed the top layer out, pressing out all air bubbles with the yellow scraper tool.

After you're sure it's stuck on good, peel away the rest of the bottom piece, using the scraper tool to press it down as you go. Once the whole thing is stuck, go over it thoroughly with the scraper tool. I was very adamant about this step because I knew that it would have to hold up well to the elements.

Finally, peel off the top layer of paper and witness the results of your labour!

I was a little upset with my first application as one side was about 1/8" higher than the other, but Jake says it's not very noticeable.

I re-did all of the steps on the other side and that turned out better. Which is a shame, because that's the side that faces the house. The other side faces the street.... Oh well! All in all I'm pleased with the outcome. It really has made an otherwise boring mailbox unique.

My next post will show what we did to finish the project and get it mounted (hopefully I'll have it mounted tonight!)

What do you think so far?