Blocking - A term that took me forever to remember *VIDEO*

Early on in our renovation journey, Jake informed me that after we removed the plaster and lath, we'd need to put up blocking. I'm fairly certain I smiled and nodded along until he mentioned the b-word. What the heck was blocking?

He explained that since this is an old house, there wouldn't be any pieces of wood in between the studs to keep things level and solid. They used to rely on the lath to do that. The lath that we were going to completely remove. To compensate, we'd have to brace the walls before we could add the plumbing, electrical, and drywall.

From that point on, I called it bracing.

It makes WAY more sense right? The purpose of it is to BRACE the walls. Not BLOCK them! So why on earth would it not be called bracing?

Well last weekend I started to install some blocking in the walls and since then I can officially remember that that's what it's called.

"Does that mean that you are finally done with removing plaster?!"

I can hear the excitement in your voice, but the answer is no. We are CRAZY close, but on Sunday we had a birthday party to go to and I didn't want plaster in my hair since I wouldn't have time to wash it beforehand. So Jake worked on plaster removal while I did the way more fun project of learning how to use a circular saw!

Jake explained the process of what he wanted done and then told me to call him when I was ready to use the saw so he could watch and make sure I didn't kill myself.

The day before we randomly took down some lath in my closet. I think it was just to change things up and make us feel a little better about our renovation lives. It totally worked. Removing the lath is a very quick and satisfying job. As I type this I realize it sounds like an infomercial, but...
"For very little effort, you get instant results!"

I started with that open wall between my closet and the guest bedroom (which Jake has dubbed "Spare Oom" like in The Lion The Witch and the Wardrobe). Because it is not a load-bearing wall, Jake requested that I add blocking directly on the floor first.

Here is a step-by-step list of what I had to do:
1) clean out the space between the studs (get rid of all plaster so the wood can lay flat)
2) measure the space between the studs (each one was a little bit different)
3) measure the length of 2x4 that I'd need
4) mark a straight line across the 2x4 at that measurement
5) use the circular saw and cut the 2x4
6) hammer in the 2x4 to fit snugly between each stud
7) drill two screws into the 2x4 to secure it directly to the floor.

Once I did the blocking a bit higher up, the list changed slightly. For example I used four screws to secure it instead of two, and the 2x4s were not in a direct line, but every other one was a bit higher.

Next, mainly because we just wanted to see what the room would look like opened up, I started taking down the lath on the other side of the wall. Jake came in mid-way and using a piece of wood, he smashed the lath out from inside my closet. This made it all come down INCREDIBLY quickly. 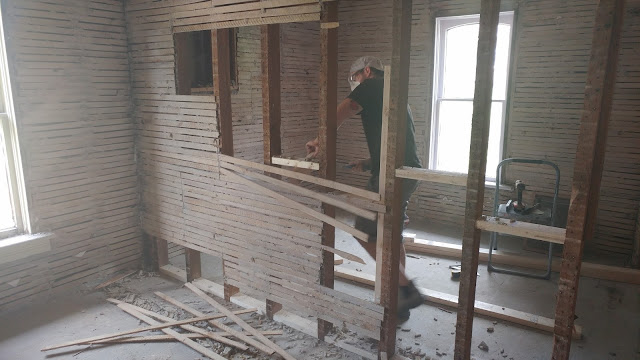 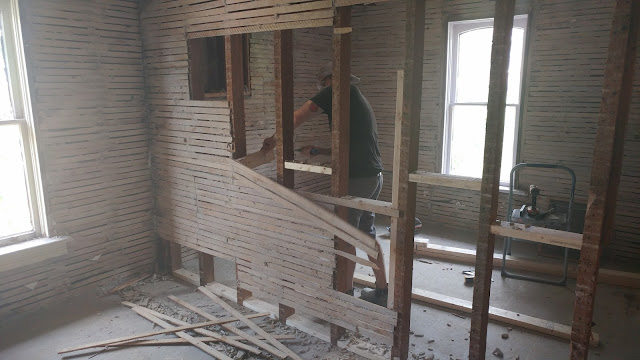 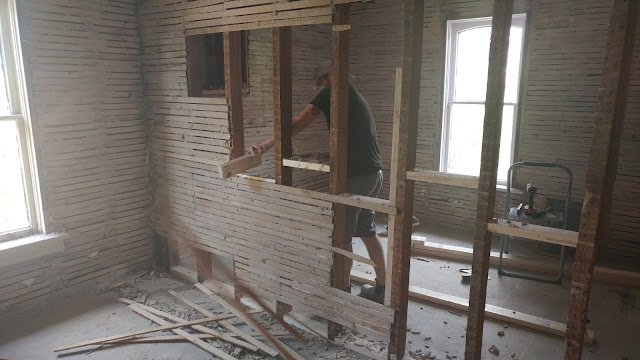 Here's what the wall looked like from inside Spare Oom:

And here is a before and after of it looking from the inside of my closet:

You'll notice that we didn't remove the lath at the top. That was mainly because we wanted to keep the stability that it offered to the wall while we worked on it. Especially since I didn't have time to put the blocking up the entire wall.

Anyway! That will be our next major project and again, it looks as though it will be a bit of a slower process than one would hope for... but because it is less dirty work, I'm hoping to get some help to get it all done!!

Here is a time-lapse video of me doing all of the above steps to put a piece of blocking in. I apologise for the butt-shot... I didn't realize that the angle I was cutting the 2x4 would place my derrière in such an unflattering position... but alas, it is the only time-lapse video I have...

Now that I've discovered that my phone has time-lapse video capabilities I hope to have more to show for you. And maybe a few others to throw in for fun :)