Plaster Removal: A not-so-smart thing to tackle during the hottest summer on record

We're finally getting close to the end of demolition!

Well... maybe not quite CLOSE... but the end is actually in sight now. It really hasn't even been in sight for a while. One of the main reasons it's been taking so long has been the arduous task of removing plaster.

In case you didn't already know...
I.
Hate.
Plaster.
And removing it is a slow and filthy job. BUT as I said, the end is finally in sight! We only have two rooms left so I decided now was the time to write about how we ended up removing it all. 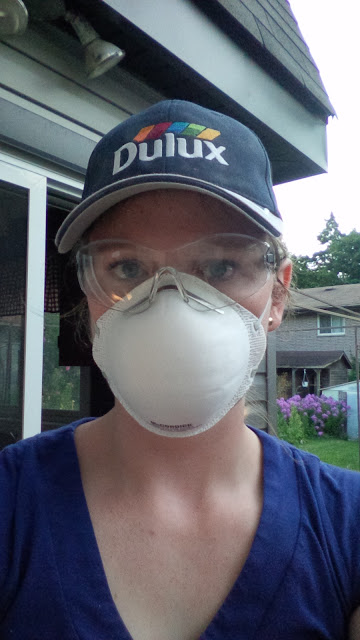 Plaster is awful once you start tearing it down. The dust gets EVERYWHERE. And chunks will inevitably go flying all over the place as you work. Make sure you have safety glasses and a clean mask to wear. I've had plaster get in my eyes and it is very painful. Plus you look like an idiot wandering around a half-torn up house trying to get it out of your eyes without any mirrors or running water.

There have been a number of times where Jake and I were working away and then one of us just stops suddenly with a hand clutched over their eye like it just got taken out in a knife fight.
That's why I also started wearing the baseball hat. It makes me sweat more, yeah... but the visor prevents plaster from making its way behind my safety glasses from above. Well worth the extra grossness.

Which brings me to my second point:

Be prepared to get disgusting.

We started removing the plaster at the end of July. In what happened to be the hottest summer on record. Brilliant idea. Every single day, Jake and I would get home from work, change into work clothes and head to the house. By the end of the evening, we would be covered head-to-toe in a thick layer of white plaster dust (or black dirt if Jake happened to be working on the ceiling). Because it was so hot, we'd sweat like crazy.. which only made the plaster stick to us more. I honestly don't think I've ever showered as much as I have this summer.

Now on to how we actually removed the stuff! We each have found out own way of doing it. Jake's is perhaps more consistent, but my way I think is more efficient. The first thing was to get rid of all of the trim.

Once the trim is off it's time to smash some plaster!

Ali's way:
- use a small sledge hammer
- smash the crap out of the wall
- use prybar to get behind the plaster and just peel it off

I don't have the muscles to consistently just hammer away at the wall like Jake does. So by mixing up the movement I can keep working and yield the same (if not better) results that he can.
Plus there is something very satisfying about getting huge chunks to fall off the wall and that happens way more often if you use my method.

Another big thing you need to keep in mind is clean up. I've said it before and I'll say it again. Keeping a job site clean is beneficial on so many levels. Not only does it make it a safer site, but it also makes it more efficient. Plus it's nice to take a break every now and then while still being productive.

Cleaning up plaster is more time consuming than you'd think though. The stuff is heavy. We use a shovel to scoop it off the floor and into a garbage can for transfer to the bin outside, but because of the weight of plaster, you really can only put three or four scoops in the garbage can before it becomes too heavy to carry outside. Jake and I have really hit a stride with removing plaster but I still can't wait for this part of the renovating process to be over.

Anyway, I'm having a hard time coming up with more to say on this topic without getting angry so I'll just leave you with a bunch of pictures of our progress in the last month or so.

We've just got the Study (I petitioned Jake to call it the study instead of the office because it sounds way cooler) and the upstairs bathroom to do. As well as a section of the upstairs hallway that we can't reach  because of the stairs. But then all of the plaster in our house will be gone and we can move on to bigger and dirtier things!!! (aka removing the lath and the insulation behind it *shudder*)