When expectations get shattered by cooler things

As you know, Jake and I went to the Aberfoyle Antique Market's Fall Show this past Saturday as part of our anniversary celebration. Not only was it AMAZING to have a Saturday free of all obligations (we were determined to not do anything that we didn't actually want or have to do. A luxury that we have not had since buying the house), but it was also so much fun shopping at the market this year!

I've never seen it this packed before!

The day was amazing too. I've never been hesitant to tell people how much I loathe summer, so when the temperature on Saturday was only going to hit a balmy 18 degrees (Celcius) I was floored. It smelled like Fall in the morning and I got to wear tights for the first time this season!! (This is probably only awesome to me...)

We started making the rounds and it was only about 5 booths in when I found this gem:

I showed it to Jake and he agreed that it was nice and then he took it and talked to the seller to try and get the price down.

As I've mentioned before, I don't do well with haggling. I get very uncomfortable. I don't know why... I just do. So while he worked on shaving a few dollars off, I wandered around and starting singing songs in my head to drown out their voices. It's childish and stupid, but it works. Side note, I just went through my blog to try and link WHERE I mentioned this before and it doesn't appear that I have... So... now you know anyway!

We walked away from that stall, little water closet sign in the pocket of my sweater, paying a measly $6.

I was thinking of following in Old Town Home's footsteps and mounting this on the bathroom that our guests will be using. But Jake thought it made more sense to mount it on the ACTUAL water closet that will be in our master bathroom.... which won't likely be done for a few years...

We might just end up trying to find something similar and mark both doors. What do you think we should do?

There were a number of cool things that we saw but were no where near ready for buying, like a tufted chair or a dresser that even when we are done we won't have room for. So most of our time was spent browsing, getting ideas.

We wanted to hit up a couple of permanent booths within the market because we knew they had door hardware and we'll eventually need some for all of the doors in our house. That was when Jake found these beauties: 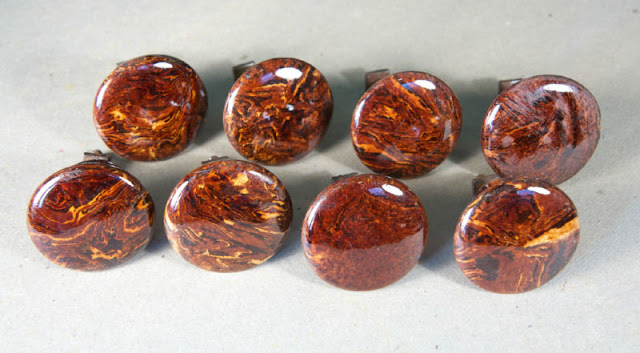 They're called Bennington door knobs and like an idiot, I didn't take a picture of the set at the market. This picture is from google.

They're porcelain but almost look like a polished wood. In person they are absolutely stunning. Jake really took to them and decided that that was what he wanted our doors to have. At first I was really hesitant because we already have a few white porcelain door knobs that are original to the house, but it didn't take long before I became enamoured with them as well.

We didn't end up buying them that day because a) we aren't ready to refinish our doors yet and this would be a cost that could go towards other things at the moment and b) we have 8 doors to outfit so this wouldn't be cheap.

The other thing that put the breaks on purchasing was the state of them. Most were incredibly stunning, but some of them were a bit scratched or chipped.

I have since found a place in the states that makes replicas and I think that might be the way we end up going with these. That way we get the antique appearance that we want, but shiny and new! (Remember, I like old things. But for practical purposes, I like new things that look old too ha ha!)

After finding out about the Bennington knobs, we wanted to check out another vendor we knew that sold door hardware to see if he had them too (and maybe for a cheaper price). And that is where we found the second (and final) thing we bought at the market that day.

Here it is in case you didn't see it slash as a refresher:

Well as I said, we wanted to get a door knocker for the house. We don't have a door bell currently so we thought a door knocker would be a great looking substitute. The only thing that worried me was what if we couldn't hear it clearly enough, what if I was baking and decided to blast the music? Or if we were working in the office with the doors shut? What if the person at the door was just a really light knocker? Would the door knocker be enough?

What we found solved every single one of those problems with the added benefit of the aesthetics that a door knocker would give.

I present to you, our new door bell! 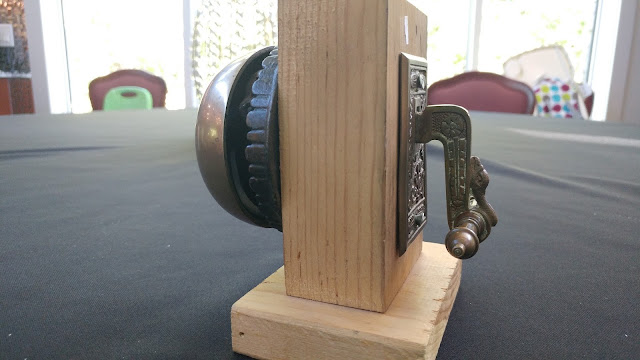 It will be mounted directly on the door with the lever on the outside and the bell on the inside. You lift the lever up and it moves a mechanism inside the bell that hits it and gives off a loud DING!

We are going to mount it upside-down though because we think it will be a lot easier for people to understand they need to pull the lever down instead of pulling the lever up. On everyone we tested, they thought it worked more like a door knocker and that didn't accomplish anything at all. When we had it upside-down, people grasped the concept a lot quicker.

What do you think of our door bell?! 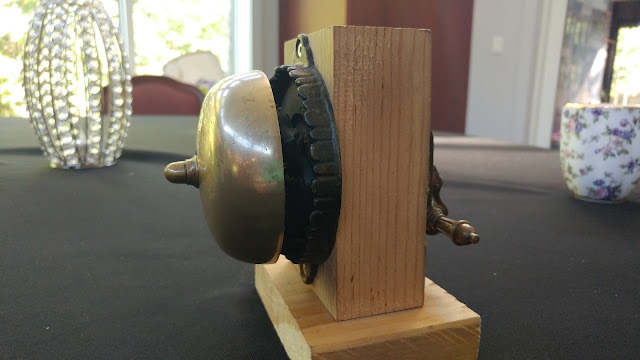 If you couldn't already tell, I LOVE it!!