Sometimes, you're just an idiot

We did something dumb.

Or rather, we DIDN'T do something smart. Or if not quite to the point of smart at least correct.

Have I lost you yet?

Let's start from the beginning (this is me pretending this is a much more exciting and long-winded story than it actually is).

When we bought our lovely house, it came with two metal gazebos in the backyard. The kind that have fabric coverings to provide sun and rain protection. This was amazing for me.

If you don't know me... here is everything that you need to learn: I. Hate. Summer.

Yes. Believe it or not, I am the only person in existence who gets fat and depressed during the summer instead of the winter. I am super pale and gave up on trying to tan YEARS ago when I finally realised that all I do is burn and then go back to white. I have learned to embrace my pastiness and in fact prefer the way I look without any kind of sun-added glow. So, having something that allows me to sit outside but be completely protected from the sun's horribly awful light was PERFECT! This summer we were outside all the time to take breaks from the sweat-inducing work we did inside and I loved the fact that there was a spot for our rocking chairs under such cover.

Only the gazebo above had its fabric covering on it. We never bothered putting the other one up because we weren't living there yet. So all summer I kept saying to Jake "we need to make sure we remember to take the cover down before it snows." Over and over I said this to him.

Because about 5 or 6 years ago my parents bought a similar gazebo, installed it, used it all summer, and didn't bother taking the cover off for winter. And what happened? The weight of the snow collapsed the whole thing.

So I was adamant. We would learn from my parents' mistake!

We did not learn. 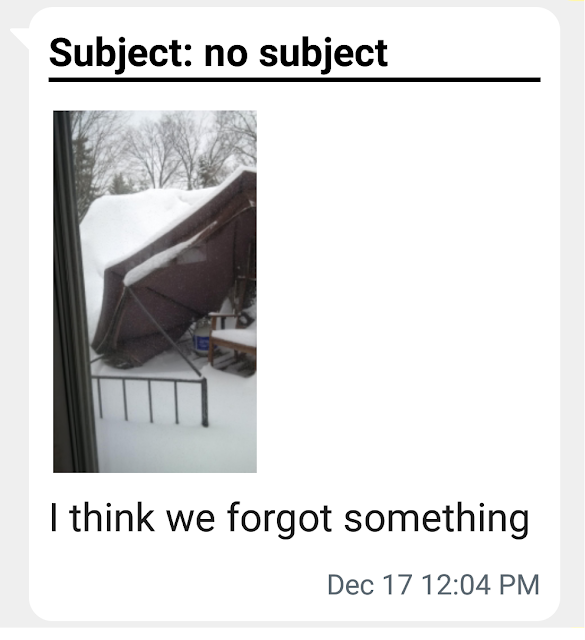 I received this text when I was in the middle of a dentist appointment. So already not in a stellar mood. All I could think was "YOU IDIOT!" but to myself. Not to Jake. Well... maybe a little to Jake. But mostly to myself. And then a split second later all I could do was laugh. It was one of those things that happen in life that I knew wasn't worth getting upset over.

This is unfortunately the only picture I have. Jake took it from inside the house and then immediately went outside and dismantled everything for scrap like the efficient man he inconveniently is (sometimes anyway). 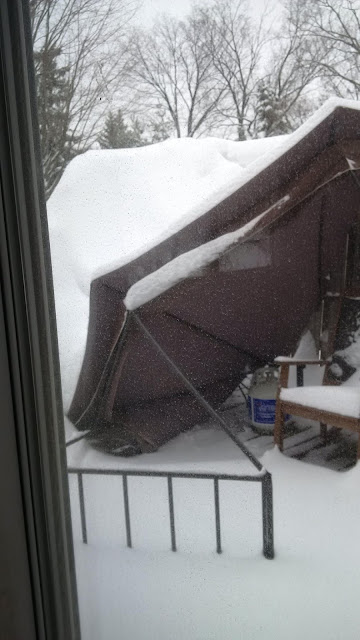 As you can clearly see we've had quite a bit of snow lately. With the Christmas season around the corner, I have been incredibly busy on the weekends so Jake has been the one heading the work at the house. As a result, the whole "winterise the house" thing kept slipping from my mind.

I think all we'll do for next summer is move the other gazebo over. That will tide us over for a few years I'm sure. Eventually I'd like something a little more permanent for that location that would do well for entertaining, but we'll see what happens. It's not very high on my list of priorities right now.

Every time I look at that picture I just want to shake my head...

Side Note:
When I told Jake that I was going to write a blog post about this he said "about what? Winterising the house?" and then proceeded to start listing things that people ought to do to winterise their homes and prepare for the season before I could explain that no... the post was just literally about the gazebo and how stupid we are.

But he gave me the idea to do a "PUBLIC SERVICE ANNOUNCEMENT FROM JAKE" kind of post every so often. Since starting this blog, Jake has had random bits of input that I either choose to ignore (politely) or try to integrate into my own post ideas. His ideas are often quite good, but sometimes just not what I particularly care to talk about. So if I write them as from his perspective you will have the benefit of reading it without me trying to sound passionate about it (ha!)

So look forward to a post about that soon. As well, I've had a request from a reader to do a post about the bench that Jake made for his sister. I intend to write that one up as well after I interview him on exactly how he did it. I warn you all though, there won't be many pictures for that one. He made it in secret in his dad's workshop so his sister wouldn't see it so I don't have photos of the process.