In which I try a new tool but chicken out

If you've been following my blog at all you'll know that I've been working on something called blocking for like... ever.

I've even got a whole post about the first wall I did (which was way back in September... oh man that makes me feel uncomfortable).

Needless to say... blocking takes a while to do. Not that I have been working on it non-stop since September of course, but it's a rather slow process.

Recently though I've kicked my blocking game into high gear and really put my focus on getting it done because other things are waiting on it (other things like electrical, plumbing, basically everything else... you know.. the important stuff).

One of my goals for the weekend was to finish blocking the master bedroom and again, if you follow me on instagram or facebook (look at me, plugging my social media!) you'll have seen this picture:

Happy little renovator right there! Jake and I managed to accomplish all of the goals we set on the weekend, and that absolutely includes completing the blocking in the master bedroom!

How did we do it you ask?

With this bad boy here:

One of the main reasons blocking has been taking so long is that I've been using screws to secure it in place. That's all fine and dandy, but it is rather time consuming.

So this Saturday, anticipating getting the ceiling done the next day, I asked my dad if we could borrow his nail gun and air compressor, and if so, could he show me how to use it.

I figured I could crack out the nail gun and complete the ceiling in no time at all!

My dad gave me a brief lesson on using the nail gun and then told me how to use the air compressor with it.

Awesome! I was totally ready to do this! It was going to make the job so much easier and I could feel like an empowered woman! (or something...)

But once I got everything in the house and up the stairs I just stared at it for a few minutes (Jake was getting his hair cut so I was alone).

And this is how I felt: 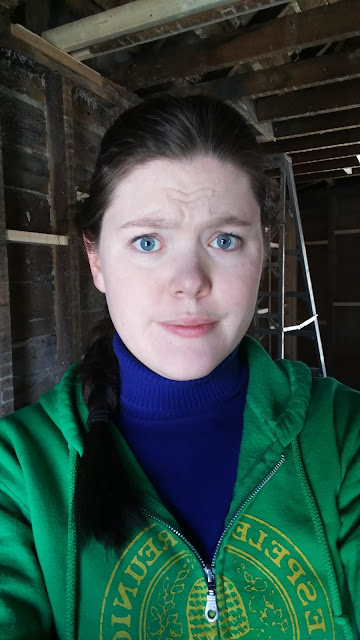 Slightly overwhelmed with a healthy dose of "scared".

-SPOILER ALERT- I needed Jake to do this...

While muttering my new mantra, I attached the hose and gun. I was trying to remember everything my dad  told me while also trying to FORGET the story my brother had told at dinner last Friday about the time my uncle accidentally shot a nail into his wrist.

I waited a little bit for the air compression to build up (that's what I told myself anyway) and kept looking out the window to see if Jake was there yet. No luck. I was alone.

I had to do this.

I would never live it down if I didn't do this.

Come on Ali! MAN UP!

I thought it would be prudent to do a test shot on something where I didn't have to be on a ladder. That way, if any of the horrible things I imagined could happen, actually did happen, falling from a ladder wouldn't be added to that list.


I took the gun to the corner to try it out on a piece of wood I had previously added there. I lifted the gun up (fun fact: nail guns are heavy. And I am weak), pushed it against the wood, took a deep breath, and pulled the trigger.

I pulled it again.

I put the gun down and started fiddling around with the air compressor, trying to get it to work but for the life of me couldn't figure out why the pressure wasn't building up.

And that's when Jake arrived and told me that I had the air release valve wide open. So while the machine was doing its darnedest to create pressure, it all just escaped through the valve.

I'm so smart. (This seems to be a recurring theme of my blog)

Jake closed the valve and did the first test with the gun to make sure the pressure was correct and then he handed it over to me. I went through all the steps again except this time it worked. Kind of.

Basically... it sparked, shot a nail half-way in, and ultimately scared the crap out of me,

I tried it again a few times and got it to work, but I still didn't feel comfortable with it. The gun is so heavy that I have a really hard time controlling it with one hand. And I don't feel particularly safe holding it with two hands. And then there's the fact that doing the ceiling means I'd be up on a ladder, leaning at weird angles.

Change of plans then.

I measured and cut all of the wood, laying it out on the floor underneath where it would be going in the ceiling. 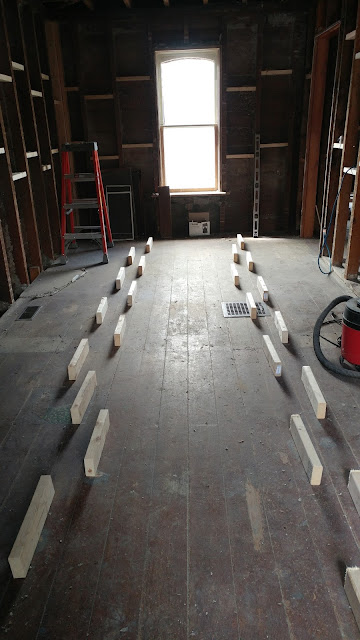 Then I called Jake and he went up the ladder and nailed them all in place while I acted as his assistant. (I was a really good assistant. Even if I yelled at him for constantly handing back the hammer the wrong way. So inefficient, that man!)

In the course of about a half hour (not including cutting the wood) we got the whole ceiling finished.

Which then opened up the rest of the day for us to clean the whole house and move things around to open up the living room (which we are taking the floors out of this week) and the office/bathroom (so the dry rot can get fixed).

Next Saturday we will be using this same level of efficiency to block the ceiling of the living room so that we can take out the flooring in the master bedroom soon.

Once again, have a look at how STURDY our master bedroom has become! (Can anyone make blocking sound exciting? I'm trying, but suspect I'm failing miserably)

Before the ceiling was done:
And after: