Under the old flooring is even older flooring!

As you all know, Jake and I are putting in new flooring throughout the house. I'm not going to go into detail on WHY we're doing that, mainly because I already have. But also because I don't want to derail the point of this post.


I think I've already derailed it...

This week Jake and I have been working on tearing up the old flooring in the living room so that we can get some other work done that needed the old floor to be gone.


The skinny pine strips are not original and were buckling pretty badly but we weren't sure if they'd actually be easy to pull up or not because sometimes fate likes to be mean like that. We were actually really lucky on that score and it seems to be coming up without any real difficulty.

When Jake pulled up the first piece he flipped it over and saw that it was stamped (or something) with a brand name. I've tried looking into the Peerless Brand but haven't come up with much so far. If you know anything about this company, let me know in the comments!

Anyway, the first night we got about 1/3 the room done (there were things we had to accomplish at home before we went to bed otherwise we could have done more).

There was some black underlay beneath the pine slats but when we pulled THAT up we got this: 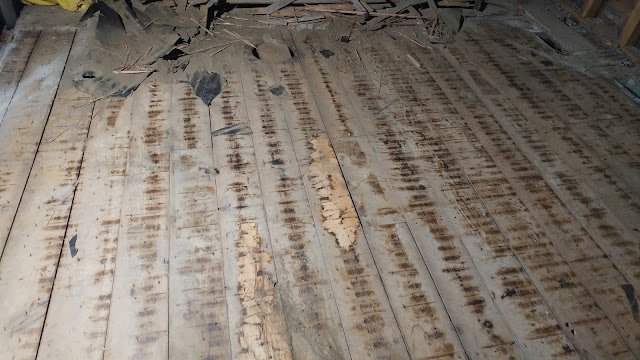 You have no idea how thrilled I was to see these. I didn't think that we had any original flooring left on the main floor.

Just look at this!

Now came the difficult part. What should we do with them?! I knew we couldn't just keep them where they were and refinish them, for a few reasons actually.

First, there were a bunch of holes in the floors. Big ones. Including a strip almost a foot wide that runs the whole length of the room for some reason (Jake and I have differing views on why that strip exists).

Then I asked Jake what his opinion on wood floors in a bathroom were.

It was a hard no. (For very legitimate reasons)

Okay, what about the kitchen floors? Would we have enough to do them?


Jake suggested we just leave it and repair it as best we could, but that wasn't an option for me because it would end up being far too rustic for the style we're going with in the house. If it was in a vacation home, I'd absolutely be all for that. But this house is going to be more formal, and the gaps and gouges that would add character there, would just be out of place here.

Ultimately we've decided to leave it where it is. We will be tearing the nails up (to prevent squeaks) and putting a thin sub-floor over top of it before installing the new floors we purchased last June. This will be the quickest and cheapest solution for us.


Jake suggested we sell it but I shut that down instantly. The flooring is too amazing to just get rid of. If we can't use it, we can at least keep it in the house for future generations to find and love.