I feel like a fraud. A DIY blogging phony!!

Jake and I decided to hire some work out. And by some I mean, all of the plumbing, electrical, and drywall.

We were originally scared off by the crazy prices of hiring that stuff out, but if we want to actually live in the house some time this century, we have to make concessions somewhere. And those concessions are officially blowing any kind of budget we had out of the water.

So if you are our friends/family and happen to read this (looking at you Liz...) just know that we will be dirt poor for the foreseeable future. Ergo, no spending money.

Now, onto the happy and fun stuff!


I had oral surgery on Friday morning. Which is neither happy nor fun.

If you were hoping this post would be that video tour I talked about doing, well... this is the reason I won't be doing it for a while. I have a pretty serious lisp right now. And that would be hilarious to me, if laughing and smiling didn't pull at my stitches....

But aside from a little pain and next to zero eating capabilities, the surgery was fine. (I weighed myself yesterday and have lost over 6lbs since Friday morning. That's 4 days...)

Since I was ultimately fine, Jake and I went to the house on Saturday to get some things done with the strict instructions from my doctor that I couldn't do any strenuous stuff.

So we built a wall!

Which might SOUND a bit strenuous but really... it's not.. especially when you have a husband there to do any of the heavy or awkward work.

A bit of background...

This is the living room wall that backs onto the staircase. As you can see in this photo (because I have so brilliantly labelled it) there is a big pipe that goes up the whole wall.


That pipe is the added duct work that brings heat to the second floor. Unfortunately, the pipe is just a teeny bit too big to hide comfortably behind the walls.

So the previous solution was to have a little jut-out like this:

But we figured, since the wall was going down to the studs, we might as well fix it and make it a smooth wall.

We set up the laser level to ensure everything would be perfectly straight for drywall installation and then just went to town.

Then on Sunday, two days of practically not eating while still being active caught up with me and I got really sick. I felt so horrible that I asked Jake to go tell my mom and in that precise moment I realised that I had officially become this guy:

That fact still stings a little...

After my mom forced me to eat, I felt better and did boring things like laundry and taxes while Jake went to the house to work on re-framing the doorway into the vestibule.

Originally, the doorways leading from the vestibule into the living room and dining room housed actual doors. I don't have great pictures explaining this, so I'm going to share a bunch of them and hopefully you can piece it all together...


I didn't like that. It made an already small space feel even smaller. Immediately, Jake and I agreed that we would remove those doors and not bother replacing them again.

But then there was the issue of the front door.

In the above picture, you can see the height of the front door right? Well look to the left and you can then tell that the front door is taller than the doorway leading into the living room.

This led to this issue:


When the front door was completely open, it cut off access to the living room entirely.

This:
A) made the vestibule seem cramped; and
B) made it less than ideal to get out the front door when in the living room

A while ago (like... months...) I was staring at the problem area. Just staring. For ages. When Jake finally noticed and asked me what I was doing and I simply said "I'm thinking things I probably shouldn't be thinking..."

And that was true. I was thinking that it would be a good idea to just take the doorway away entirely, go right to the ceiling.

After a few discussions, different ideas thrown around, and issues we hadn't thought of coming up, Jake and I came to the conclusion that the best idea would be to keep the doorway, but to just raise it to the level of the transom window.

Without further ado I give you said framed doorway! 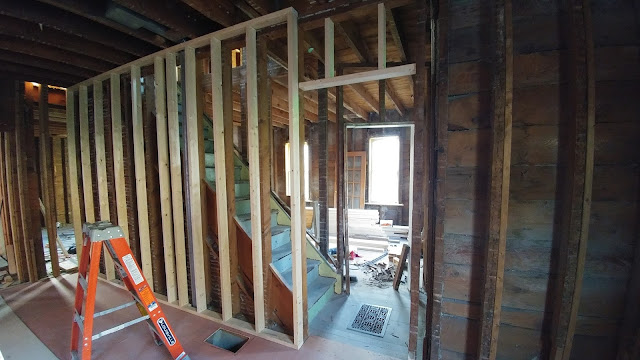 But here is where it gets exciting.


When I saw it yesterday I squealed with excitement and just kept walking around in the vestibule, swinging my arms like an idiot or pretending to carry something big and awkward. Then I went full-blown insane and pretended to invite guests in while SIMULTANEOUSLY pretending to be said guests.

Either way, I was floored.

This was something I had thought about as an improvement for SO long that when it actually happened, without any concessions on what I wanted, I wasn't quite sure what to do with myself! Generally speaking we haven't got to the point where things have actually become improved.

It was so instantly gratifying!