The tour I never gave you

Lately I've been toying with the idea of giving you guys a video tour of the house as it currently is. AKA in complete renovation-mode.

It would totally appease my vanity by allowing me to be narrator/host. Plus it would give me more blog content while Jake and I wade through this tediously slow part of renovating.

But thinking about how I actually should do that, I realised that I never took you on a photo tour of what the entire house looked like before.

If I was any kind of GOOD blogger I would have taken a million more pictures than I did (I was too excited to get started when we bought the house) and I would have done this months ago.. but alas, here we are...

So sit back and get comfortable, because this is one doozy of a post! 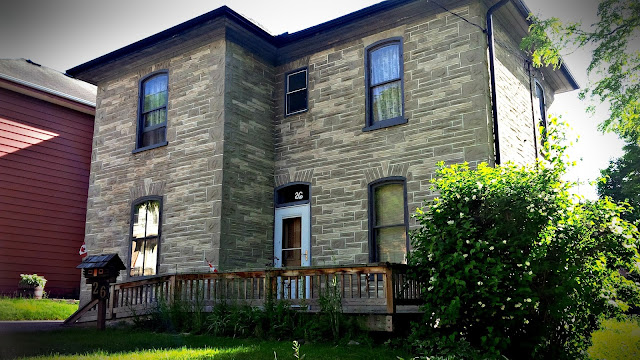 The exterior of the house was one of the first things I fell in love with. The house suffered through the cement/stucco craze that seemed to make its way around town in the 60s or 70s but this house was done very differently from most of the others. In pictures, and from a distance, our house looks like a stone house. Which is awesome.

What isn't awesome is the fact that the siding is cracking in multiple places and likely won't last too much longer without allowing water to get in. We think that in the short-term, we will keep it as it is for as long as possible and then, when it becomes necessary, we will fill the cracks and holes and just paint the entire exterior.

Ultimately we would like to take it down and add real wood siding to bring back some victorian charm, but that will be very expensive so it will have to wait.

The house had storm windows for all of the original windows on the main floor. I believe this was the only one that cracked (aside from the one I was working on last fall that now needs two new panes...*sigh*). So that is a huge benefit. I will be stripping all of these down and reglazing the glass (or adding new as necessary) and then eventually we will try to make new ones for the 2nd floor windows. We are also toying with different ideas to put screens in during the summer months.


The front door is beautiful. I will be refinishing it (hopefully this summer) and we will be adding the doorbell that we bought at the antique market last September. The storm door is newer and works great, it's just not stylistically what I want. It will be staying though until I care enough to change it ha ha

One of the other reasons I fell in love with the house exterior was the AMAZING gardens in the backyard. We FINALLY did some work on the yard a few weekends ago, but we completely neglected it last year aside from the occasional cutting of the grass.  But even with all that neglect, the yard was gorgeous.

This is how small the area is:
But despite the teeny squarefootage, I still intend to glam the crap out of it. We already have plans to put down a marble mosaic floor and have some big plans for the staircase. 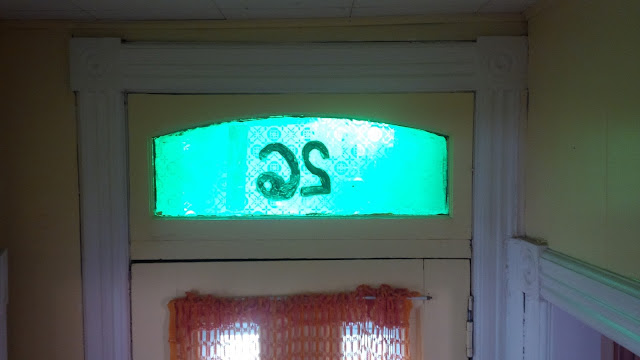 And the transom will eventually get refitted with a custom stained glass piece (because that glass is broken).


Living Room:
The living room is huge. It's (if I remember correctly) 22'x12'. So huge, but long.
This actually works well for us because we plan on creating a few different spaces visually. The couch / fireplace area, and then a small gaming table (by gaming I mean like, chess and backgammon ha ha) with two chairs by the front window.

We will be adding a new gas fireplace that is more formal but we learned that we'll have to re-exhaust it because of the way that newer fireplaces are made. So that will be something we gift ourselves down the road. In the short-term there will probably be an electric fireplace there (because this girl likes her ambient light).

The living room has amazing natural light thanks to the three big windows, but there was just one light fixture in the whole room. That's something we will be changing.


Kitchen:
Another nice, big room is the kitchen. We totally lucked out here because most old houses have teeny, tiny ones. Our kitchen is an addition to the original house, hence the great size.


Thanks to the sliding glass door and the two huge windows, this room gets amazing natural light from nearly all sides.

We will be utilizing more square footage of the kitchen for cabinetry, counter tops, and a pantry we intent to build. We will be losing the "eat-in" capabilities of this kitchen, but in my opinion, that's what the dining room is for... to dine!


Office:
I don't have many pictures of what the office looked like when we bought the house, but just know that it's got one window and three doors that lead to the main floor bathroom, kitchen, and dining room, respectively. 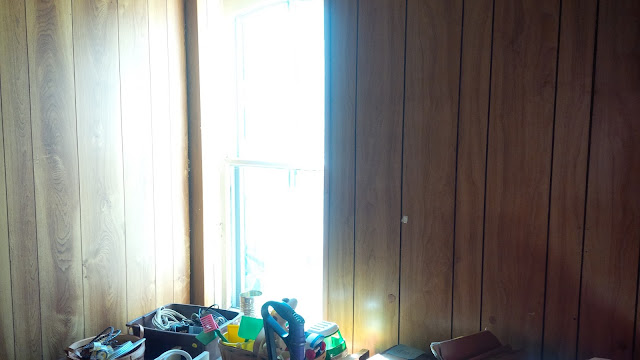 This room will definitely look 100% different when it's done.


Dining Room:
Again, another room I have very little photographic evidence on what it looked like before.
This was a big selling feature for me though because I really like formal dining rooms and cannot wait to entertain properly. (Our apartment was really too small to have anybody over)

This room is a really good size and again has amazing natural light thanks to the three large windows.

Hall:
The upstairs hall is great. It's a decent size and as a result is bright and airy.

We were missing one spindle but recently had a local woodworker create a copy to match the originals. I'll share more on that at a later date, but needless to say I am very happy with it.

Also, if you look at the above picture, the section that looks like a bookshelf with a window above it used to be a door originally. I have no idea when that got changed but it happened before the siding was put on. Jake and I keep going back and forth on if we'll put it back. I love me a good balcony, but we may just go with a porch instead.


We will be moving the ceiling fan from the living room up here. I generally don't like ceiling fans, but the second floor can get pretty warm so we both agreed that having a fan will be good for air circulation.


Guest Bedroom:
Another space with few pictures, and those pictures don't really show anything that is relevant... like the size of the room... 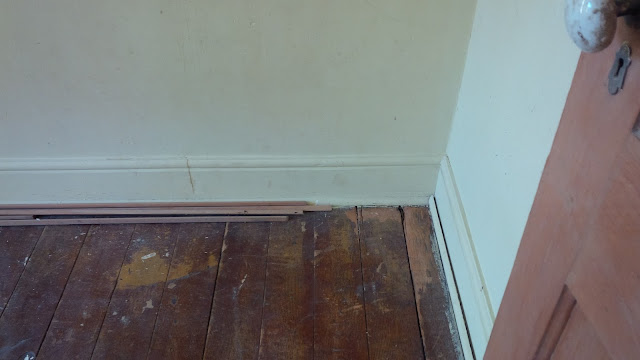 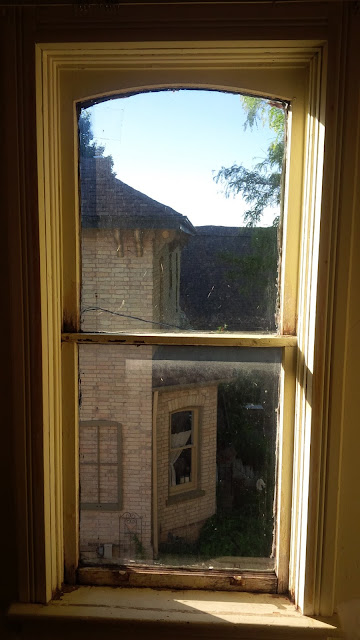 For a guest bedroom it will function perfectly. We'll be putting a single bed in here because it will likely also double as our library... and that means I need room for bookshelves..


Master Bathroom:
Ugh, this is the ONLY picture I have of this room before we started tearing things out...
I have zero excuses... The blog existed by this point... Sorry.

All you need to know is that it's a nice, big room that was a bedroom/den with an ensuite when we purchased it.

We are turning the whole thing into a bathroom with a water closet.

Oh and this room gets HOT in the summer.


Master Bedroom:
The master bedroom was originally two bedrooms. Then at some point it was made into one big room. And then again it was split into two rooms. We have since opened it back up into one big room again. Confusing, I know.

The master bedroom is big, but narrow. There is a really good sized closet in the front section that will work brilliantly for Jake. Honestly, for the age of the house it's amazing the closet exists at all, let alone that it is as big as it is. I am so excited to finish this room and move in.


Ali's Closet:
And as you all know, I'm crazy and turning a bedroom into my own closet.

The room is about the same size as the guest bedroom except the doorway is on a bit of an angle that eats into the space.

While this room will be a fully-functioning closet, we are adding the electrical in terms of it being a bedroom because for re-sale value (if that day ever comes) we will list the house as a three-bedroom, counting my closet as one such room.

To our mind, the space is put to far better use as a closet than a second guest bedroom that would likely never get used.

Unfortunately for us, the basement is one of those creepy, wet, dungeon types. Which totally sucks since our laundry will be down there...


To clean it up we will be getting rid of all the dirt and cobwebs and then painting the entire thing (probably white).

It will definitely need a dehumidifier running practically 24/7 but we'll deal with it.

I need to clean the windows badly though to let more natural light in. And maybe one day we'll add doors to hide the crawl space and utility room.

So there you have it!

That is officially the tour of what the house looked like when we purchased it.
Look forward to a video tour of the construction zone sometime "soon". 😀