Happy Blogiversary to me! - A guide on not killing one's spouse during renovations.

One year. I can't believe I have had this blog for a full year.

When I thought of what I could write about for the anniversary post I was pretty adamant that I didn't want it to be a mere recap of the past year.

There's something nice about doing that at the end of the year where you can also take stock on the goals you want to achieve in the year to come. New Years Resolutions and what have you...

But that meant I was stuck.

It didn't help that I made the realization that the anniversary was coming up only three days ago.

That meant I wouldn't have time to do some crazy, awesome, pinterest-worthy project.

So instead you get my personal guide (with a little flavour of Jake's input) on how to not kill one another during renovations (and house projects in general). 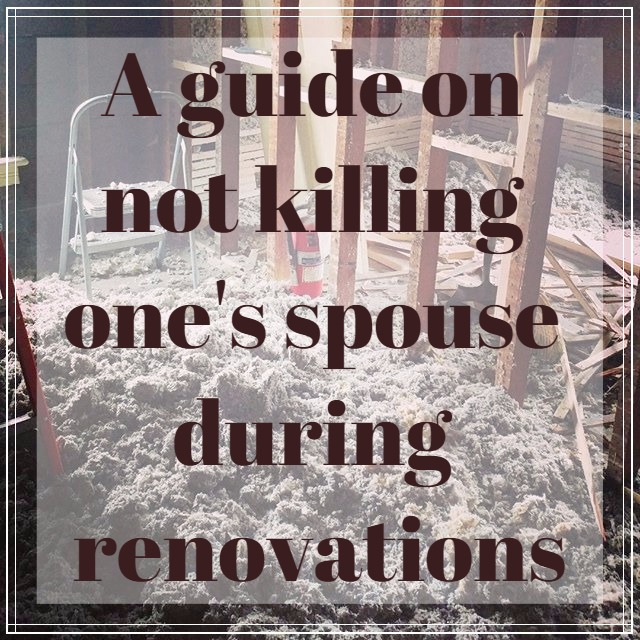 I've read a number of posts and articles on this topic before but I don't think I've ever seen this tip. And to me, this is probably the most important:

1. Don't be fighters to begin with

Jake and I don't fight. No, really.. It's true! We argue, we spat, we get incredibly mad at each other, but we don't actually fight.

At one of my wedding showers, guests were encouraged to fill out a notebook with advice for us in our marriage. I have no idea how many people wrote "never go to bed angry" but it was probably the most repeated advice I ever heard during our whole engagement.

It's cheesy. It's stereotypical. And it works. Not once have I gone to sleep while still being angry with him. It is very important to both of us that whatever issue we're going through, it gets dealt with before falling asleep so that we can wake up the next day on the right side of the bed.

If you already have a strained relationship, I'm here to tell you that renovations are definitely NOT a good idea. The stress that you go through during renovations (especially in an old house where surprises happen constantly) is intense. If you as a couple are not equipped to deal with that level of stress together, avoid it at all costs.

Which leads me to my second point:

2. Turn stressful situations into funny ones

Jake and I have always got on so well because our sense of humour is practically identical. We constantly make fun of one another and ourselves and I don't remember the last time either of us went a full day without laughing with (or at) each other.

Instead of getting constantly frustrated by all of those inevitable moments, we have tried to look at things with a lighter heart.

Valentine's Day could have turned into a miserable evening if we had let it. On a night that should be filled with romance and firelight (and chocolate), we were in a dirty, cold, dark house trying to frame a doorway that we COULD NOT FIGURE OUT!

Instead of stressing over it, we couldn't stop laughing in disbelief at our stupidity. Keep it light. Keep it funny. The little problems won't seem like big ones then.

3. Keep an eye on the big picture

Our renovation has taken a bajillion times longer than we ever would have thought possible. The thing that keeps us both going is the knowledge that one day it will be done. And it will be exactly what we want it to be. And we will be so proud of what we could accomplish.
I am constantly reminding myself of the potential our home has. I often find myself daydreaming about what it could become and Jake and I both talk frequently about things we want to do and see there.

And even more importantly:

4. Make sure the big picture you both see is the same one

I think this one is an understated tip. You can't go through a big renovation peacefully if you want different things at the end of it.

We lucked into this one. Our first visit to the house we were talking about what each room could be and, details aside, we were on the exact same page.

If you don't agree on an over-arching theme, there will be unnecessary stress every single step of the way.

This one is typical on guides like these, but for a very valid reason.

I was raised to be an independent woman. And I was (am) very good at it. Generally speaking, I would rather hang out on my own than with most people. The issue with independence is that there is a VERY fine line between "independent" and just "selfish".

I used to cross it all the time (okay, okay... I absolutely still do).

During our first year of marriage I quickly learned about the concept of compromise. And how the absolute best way to be happy in a marriage is to genuinely be willing to compromise.

It's hard. Especially because the likelihood on you being happy with compromising, acutely depends on both parties of the relationship participating.

Want to learn a secret? Compromise does NOT have to be a negative word!

From day one of renovations Jake and I have both been compromising. This house is not about what I want, or what he  wants... It's about what WE want!

So many amazing design ideas we have have sprung up from the need to compromise in a situation. It's amazing how often we like those ideas better than ones we originally thought of.

6. Rely on each other and take things as they come

I cringe when people ask me when we think we'll move in. I have answered that question so many times and not been right once. But I've learned to not even bother giving ourselves a deadline. Things come up that push the deadline back. It's not the end of the world.

Stress induced by renovations can often be the tipping point or the channel in which we put all of our other stress. If I'm having a crap day, Jake takes the reins and keeps the show going. That doesn't mean he does all the work, it simply means he knows I'm grumpy and must react in a way that ensures we get things done. And I do the same for him.

On the days when we are both out of it we just mix things up and do things like laundry or go shopping. They are things that give us a break from the house, but still feel like we are being productive.

7. Shop for things you don't need yet

You don't even have to buy anything. Just go to a hardware store and wander the aisles, tossing ideas between the two of you. You'd be surprised at what ideas pop up and more often than not, it gives you a desire to get things done.

Do I wish we would have just plowed through and got things done a lot sooner?

Do I regret doing things like going to that Halloween party, or celebrating our friend's wedding, or helping my family during syrup season?

Renovations will take over your life. It's very important as a couple to take some time to do the things you want to do among the things you need to get done.

And most importantly, cheesy though it is...