Yet another hoarding casualty...

Believe it or not, this is a happy post.

I know, the title is depressing. It's accurate too, but this POST is happy.

Why? Because the plumbing is almost done!

Last week the plumber started working on the house. Which meant we went from having these great big dirty cast iron stacks:


To these brand new beauties: 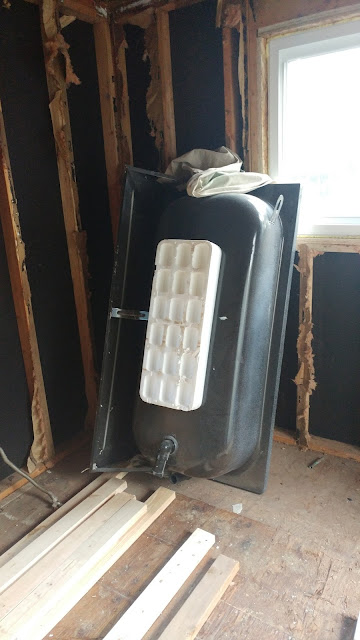 This is the bathtub that we have been hoarding since demo first started on the master bathroom... ohh... almost a year ago (don't mind me, I'm just crying on the inside).

It is a newer tub, but there was absolutely nothing wrong with it. We figured it would be perfect to go in the downstairs bathroom for now.

On Sunday, Jake and I were working like crazy to get the main floor bathroom ready for the plumbers to come in again. We had to lay the subfloor and build a wall. Simple enough right? (Hint: nothing is ever "simple enough" when you DIY on a deadline...)

We kept hitting little road blocks. None of which were inherently bad, just enough of them to add a lot of time onto our seemingly simple project.


Well, while Jake was thinking of a solution to something (no idea what now) I was looking at the bathtub stored in the kitchen and thinking about the wall we needed to build.

The plan was to tuck the tub into the corner of the bathroom, and that would determine where the wall was located. The reason the plumber needed said wall complete was because we collectively agreed that having the plumbing run in an interior wall would be far better than the original plan of it running in the exterior one. This way, if something went wrong or we wanted to change things it would be way easier because we could just go through the office wall. Plus there's the added benefit of zero chance for the pipes to freeze.

Jake, who understands me better than anyone (much to my dismay sometimes), immediately responded "What's wrong?"

I hesitated before finally saying, "....the tub is the wrong way."

The tub we took from upstairs was a left-sided tub. Which would have gone with the original idea of plumbing on the exterior wall. But when that changed, no one thought or noticed that the tub wouldn't work anymore. I'm so glad I noticed it when I did too because hardware stores were only open for about another hour or so.


So the tub which we have been moving from room to room, protecting it from the debris of demolition and working around it.... we can't use it. (There appears to be a theme going on)

Luckily, Lowes was having its DIY days and in-stock bathtubs were on sale. So we went out (third trip to a hardware store that day...) and picked a tub, surround, and hardware.


The happy aspect of this is that the tub we bought is a bit of an upgrade since it is a deeper, soaker style. So it sucks... but kind of is better. If that makes any kind of sense.


Yesterday the plumbers were back and installed the tub in its new home and if you can't tell by the bottom picture, I am totally thrilled! We are that much closer to getting the house move-in ready. Once we have a working bathroom we can work a lot longer too.