Mixing up the monochromatic - A quick and easy bathroom door improvement!

This is a bit of a deviation from what I've been writing about recently, mainly because it's a decorative improvement in a house that has all its walls...

I cannot wait for the day when I get to do projects like this (well not exactly like this... too modern!) around our own home. But until that day, my mom has commissioned me to do some around her house!

A few months ago (aka in January) my mom had the idea of lining the barn-style door into her laundry room with wallpaper. She looked online and found a good candidate and bought a roll.

It arrived in the mail in February while she was on vacation and I was way too snoopy and excited to just wait for her to get home. So I opened it up and discovered that the roll of wallpaper was not wide enough... 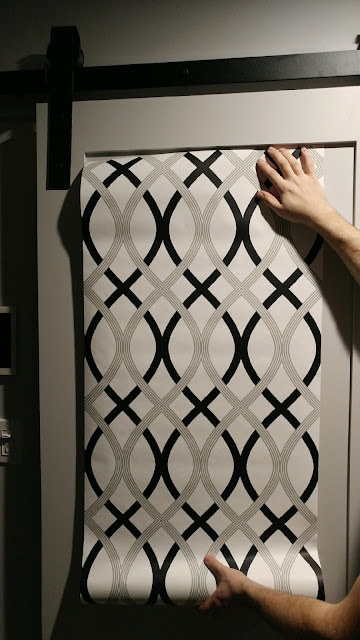 I sent that picture to my mom and told her the problem. She hmm'ed and haaa'ed and then nothing happened with it.

The barn door to the laundry room is particularly wide, but the door to the powder room is not. So, my mom decided that it should go there instead.

This is what I started with: 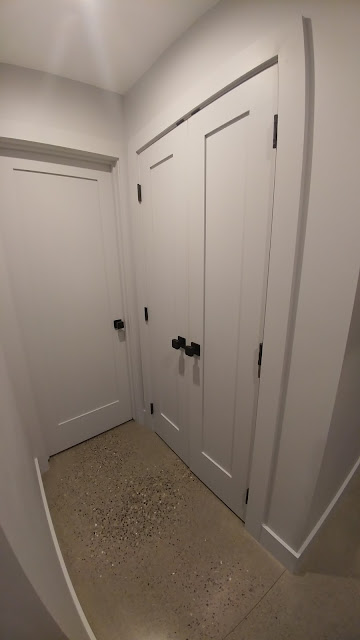 My parents' house is very modern and open-concept. This teeny little hallway is directly off of the main Living-Dining-Kitchen-TV area. It's great and convenient, but kind of boring.

Monochromatic is great until it's just not.

The double doors hide the cleaning closet and then the single door leads into the powder room.

And here is the PEEL-AND-STICK wallpaper. (Yes, you read that right. This wallpaper was totally peel-and-stick. It was amazing in terms of cleanliness, but I have to admit that there was a lot less wiggle room once you stuck it down than if it had been normal wallpaper glue) 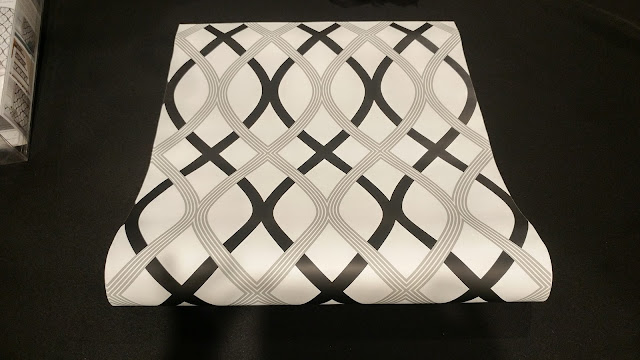 Full disclosure? This was the first time I'd ever done wallpaper. A fact I did not disclose to my mother until I'd already started. (To which she replied with a groan and a "I wish you'd started on the backside!!") Because it was a peel-and-stick, I decided to take direction from the vinyl decals I put on the mailbox last year and then just use my gut instinct as I went along. Maybe that wasn't the smartest thing to do? But then again, I'm pretty sure I rocked it.

I wanted way more pictures of this process, but it really was a two-hand process and Jake was trapped on the other side of the door while I worked, trying to fix the toilet paper holder in there.

Step One:
Make sure you have enough.

Pretty simple. Figure out how much you need, make sure you have enough of the wallpaper to cover that space.

For me it was a simple, hold it in front of the panel to make sure it was wide enough and then make sure there was enough length to do both sides of the door.


Step Two:
Find the center of the wallpaper.

Or figure out how you want the pattern centered in the door. The way that the door was paneled meant that once I was done it would look like a giant frame surrounding the wallpaper. So I had to make sure that it was centered correctly. I measured it out and then marked the center with a pencil. 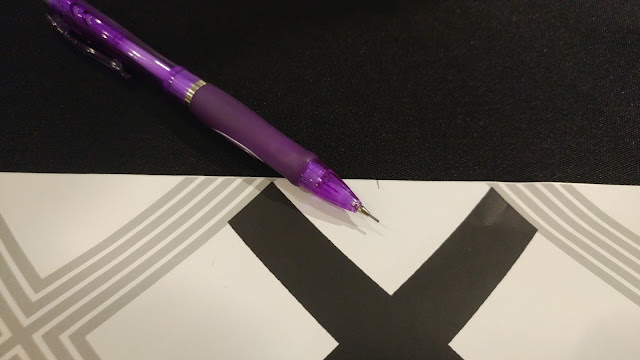 Step Three:
Find the center of the door. 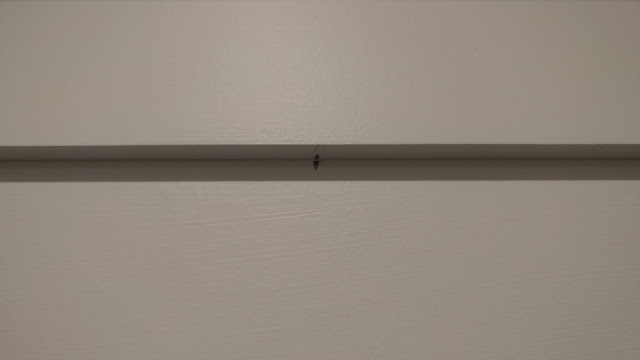 Same thing. First I marked the center on the inside of the panel, then I realized that I needed to lay the paper OUTSIDE the panel in order to get it tight to the corners. So I had to re-measure and mark the door on the trim.

I measured the length of the panel and then added about a foot extra so that I'd have lots of wiggle room. Then I just cut that length with scissors.

Place the wallpaper where it needs to go and tape it with painters tape.

This is a necessary step to ensure it is on straight without running the risk of damaging the wallpaper. Once I had it taped in place, I could take a step back to see if it was on straight. If needed, you can make your subtle adjustments here. 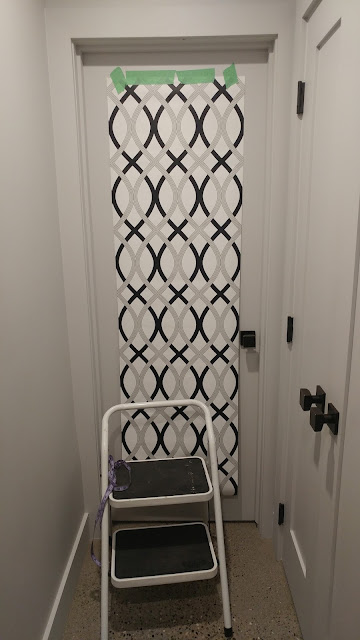 Step Six:
Peel off about 6" of the backing and press the wallpaper to the door.

Start in the middle. Keeping the pattern centered is super important so always start by pressing the middle firmly and then working your way outward. I used a combination of my hands and a wide putty knife to smooth it out. At first I wrapped the putty knife in a tea towel to protect the paper, but then my mom gave me the idea to just put scotch tape over the end. That worked better as I was able to really get into the corners.


Step Seven:
After ensuring you're lined up straight, peel the rest of the backing off and press firmly in a line down the middle all the way to the bottom.

This gives you a little bit of room to make adjustments as you go since the whole thing isn't stuck down.


Step Eight:
Smooth from the middle-outwards and press firmly into the corners with the putty knife. 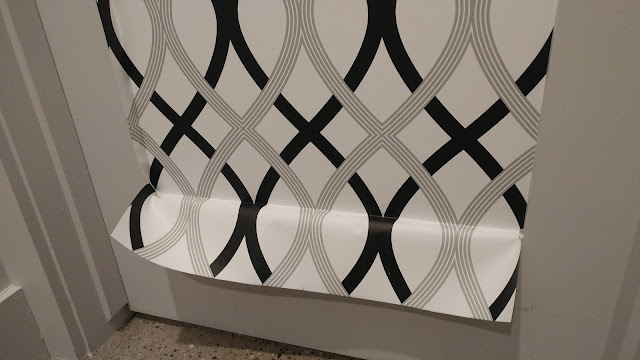 Step Nine:
Push your putty knife firmly into the corners and with a very sharp utility knife, score the paper along the edge of the putty knife.

The putty knife protects the paper in case your hand slips with the knife. It's also important to note that a sharp utility knife is key if you don't want to tear the paper. I snapped off a new blade at the beginning and another new one about half-way through.

I also found it helpful to pull the cut piece away while the putty knife was still pressed firmly in place. It prevented the paper from being pulled up with the piece being removed. Really, it was more of a piece of mind thing. 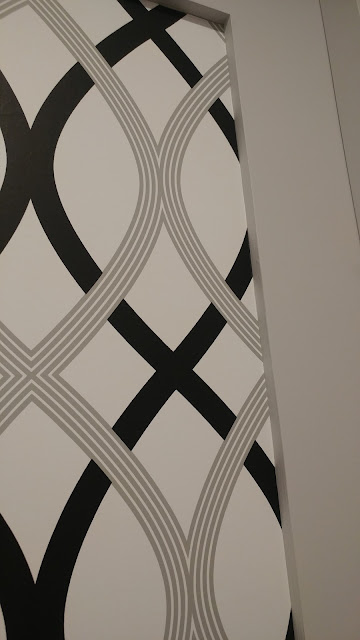 Et Voila!
You have a wallpaper-paneled door! 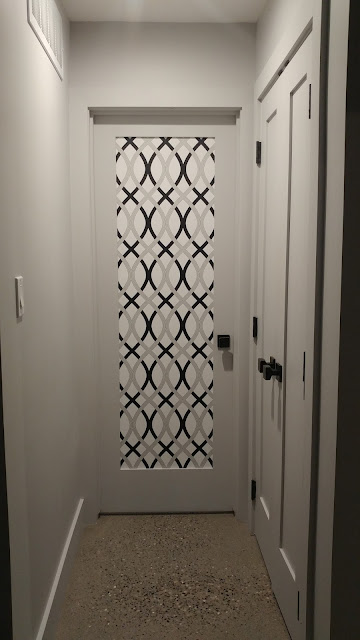 This was a pretty quick project that had a big impact instantly. From start to finish it took me 2 hours, but that involved a lot of me thinking about how I want to accomplish it and a little bit of trial and error. I still have to do the other side of the door, but I anticipate that going a lot faster.

Here is a before and after for your viewing pleasure:

Don't worry! This doesn't mean we aren't working at our own house!! I will provide some updates pertaining to what is going on there soon!