For the extremely simple rational of actually moving forward.


That is what we're going to discuss in very brief and totally unromantic terms. (Post-blog-writing-edit: I seem to have gone on a bit of a tangent and MAYBE this post isn't as brief as originally stated. You have been warned.)

Around this time last year, Jake and I lost all motivation to work on the house. Fall hit, the weather turned cooler, and suddenly the months of removing plaster in the grossly sticky heat of a Canadian summer (for anyone who is not from Southern Ontario, yes..  it does get hot here. Worst of all, it's humid heat. Blegh) seemed like it was just too much for me.

I needed a break.

And as luck would have it, Autumn presented itself to be an excellent break provider.


My favourite time of the year is from September until the end of January. The weather gets cooler, there are no bugs, clothes look and feel great, and there is SO MUCH to do!

Any possible excuse we could invent to avoid working on the house last Fall worked. And the most common was that it was so cold (come the new year we conveniently forgot that excuse and worked despite the cold. It was completely a timing and situational excuse).


This year, I am willingly ignoring my favourite time of the year for a bigger prize in sight. I can actually see the move-in date! It's currently fluctuating a little bit, somewhere near the end of November or early December. But it's there! On the horizon! Taunting me!


It is my glimpse of the New World after having spent 15 months at sea. I know that life will not necessarily be easier once I step foot there, but I can already feel the overwhelming sense of relief that I will finally be there!

And that is enough.

We will spend this Christmas in the house.

We may be living out of boxes and with construction still going on all over the house. But that won't even matter. Christmas morning we will wake up in our bed, with our dog, in our house, to open presents by our tree.

And since Christmas is King in my life, that blissful prospect trumps all other awesome aspects of the Autumn season.

Which means we need to boogie.

And brings me to my actual point.

We cannot go another winter without heat. And in fact, we can't even go too much longer into the fall without heat. We have water in our pipes. If it gets below freezing and we don't have the heat on, we'll be in a world of trouble that we cannot afford to be in.


So we started working on making the house warmer.

All the way back in the beginning of August. I'm sorry for the delay in explaining this incredibly interesting topic.

We were lucky in that our house already had a good furnace when we bought it. We were slightly unlucky in that we only had one vent that was somehow supposed to heat the entire second floor.

We also had to add vents to the office and the main floor bathroom.

Basically, it was just the kitchen, living room, and dining room that were fine.

I won't go into all the glamorous details of how to install new ducting, but instead I'll show you all of the amazing photos I took of it. It's all pretty much the same stuff over an over again, but I went to the effort of taking the pictures... it would be a shame not to actually use them for anything.


In the dining room and living room, we now have to add a bulkhead to hide the duct work.

I was super upset about this for all of 30 seconds until Jake came up with the glorious idea of just adding a bulkhead around the entire room and trimming it out so it looks like the ceiling was designed that way originally.

Honestly, that man is worth keeping around.

After we got all that done, I can honestly say we were riding a high (well I was anyway...). Something was done. Something that you could kind of actually see once the walls were up. I know that was a bit of a stretch, but I made it.

So one day on my lunch break at work I decided to hop on over to Home Depot to pick up some insulation.

I had spent the previous week doing research on what type to use and what kind of cost was associated with it all. We ended up selecting Roxul R14 for the walls. Jake has some pretty severe allergies. I mean, they aren't really that bad at all, but for someone who has zero allergies (aka me) any kind of allergic reaction seems crazy bad. So the fact that Roxul was not fibreglass but stone wool was a huge selling point for us.

I decided to start with the guest bedroom and calculated that I'd need just under two bags to do the exterior walls.

In work clothes (I work in an office) I went to Home Depot and was rather proud of myself for manouvering two giant bags of insulation onto a cart and then into my car.

Getting them into my car was not easy though. I didn't exactly think that part through.


That night I managed to insulate the guest bedroom in about 2 hours. It felt amazing to get something so immediately gratifying done.

One thing I did not like was having to put a mask back on:

Jake took some pictures of me actually working for your viewing pleasure. 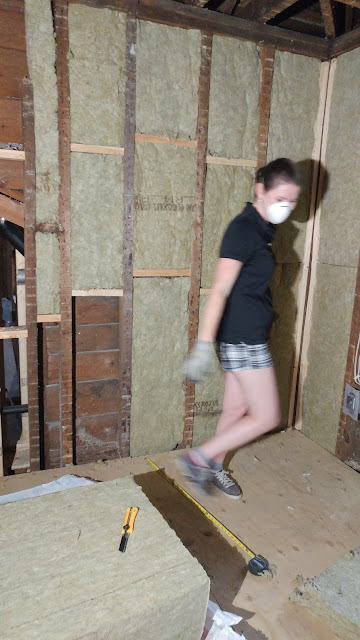 Because our house is so old, the distance between studs is irregular. That means that I have to measure each stud and cut the insulation to fit that width. It's not horrible, but it does slow down the process. This became glaringly obvious after I started to put the insulation into the kitchen (which is an addition and has regular, 16-on-center studs).

We also knew that we were going to do blown-in insulation in the attic, to save on both cost and time. But in order to preserve the air flow in the attic, Jake had to protect the holes he had drilled in the soffit from getting covered by insulation. After much thought and consideration, we decided that next year we'll need to replace the soffit. But that is a year away and the attic air flow is an important factor to keep in mind. We didn't want to put new insulation in, only to have to re-do it because it got moldy or something.

So we stapled vapor barrier to the attic studs to solve the problem.

We aren't completely finished with the insulation yet, but we're getting close.

We also decided to hire out the attic insulation as well as the bathrooms. The bathrooms are getting spray-foamed for a few very legitimate reasons:
a) The master bathroom has a vaulted ceiling and it would be impossible to get the proper R-value while maintaining airflow. Spray-foam doesn't need airflow, it doesn't allow moisture build-up.
b) The tub is already installed in the main floor bathroom and while it wouldn't be difficult to insulate behind it, it would be next to impossible to vapor barrier it. Since spray-foam doesn't need vapor barrier, it's the way to go.
c) By spray-foaming the bathrooms, we're ensuring that traditionally the coldest rooms in the house (due to tile everywhere) will be nice and warm in the winter and stay cool in the summer. The master bathroom in particular get's outrageously hot in the summer so we're hoping this will alleviate some of that heat.

We're currently in the thick of drywalling the house and every day it is getting closer to that ever elusive, New World-esque, move-in date!