The day I had been waiting for

We worked like crazy to get things ready for electrical to be done by then. Unfortunately we did not have every single light fixture sorted out.

I know, I know... what's the point?! Some fixtures, we owned, but were mid-project on them and then for various timing or weather related reasons we haven't completed yet. Others, we simply haven't bought.

We don't really want to rush it. Sometimes light fixtures cost a pretty penny and we didn't want to rush into something that we weren't 100% in agreement on. So we decided that wherever there wasn't a real fixture, we'd just get a bulb installed. To give us light at least.

And that was terribly exciting, however the thing I was MOST excited to see what this:


In our home's 128 year history, we don't believe it ever had a front porch light.

At the very least, it hasn't had one since the cement siding went up in the 70's (thanks to the Riddell family for letting me know when that happened!). There MIGHT have been some evidence to suggest a gas light was outside above the original balcony door, but Jake isn't convinced that's what the pipe was for (even though he can't think of another reason for it to be there).

So this was huge.

In my opinion, curb appeal is one of the most important aspects of a home. It is the face of your house. What literally any passerby will see.

Driving to the house after work and seeing the front porch brightly lit up gave me the warm fuzzies.(yes. I am a loser. Let's move on...)

Then it was a mad dash throughout the house to look at all of our pretty fixtures in place.

Let me tell you something quick before I go on a photo sharing spree; if having a warm house was incredible... having a brightly lit house was phenomenal!

Oh, and I would also like to comment that these pictures make the rooms seem dark. I promise you, that's just because I was trying to focus the lens (of my phone's camera) on the lights themselves. 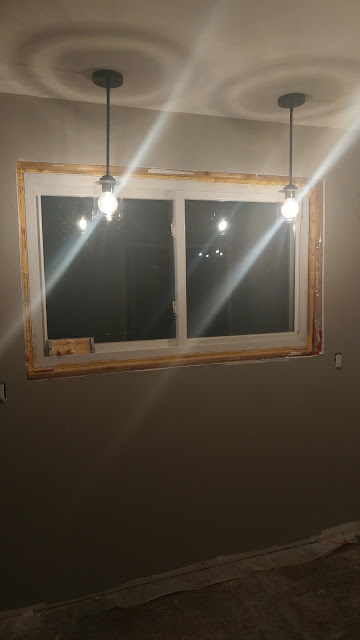 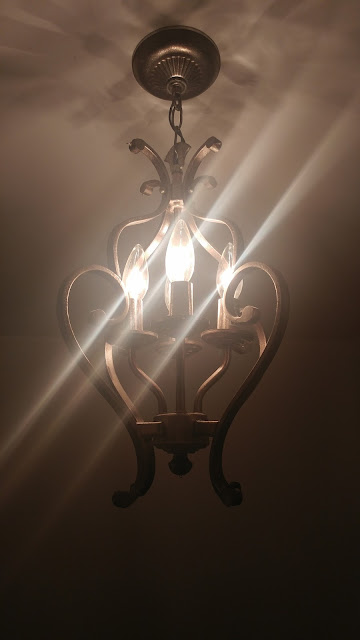 So as you can see, I've left out a number of rooms. They currently just have dangling light bulbs... giving us the chance to shop around, find what we want, wait for deals, whatever!

It is SO amazing flicking a switch and being able to see in a room. It is also amazing being able to plug in things wherever we want without the need for extension chords everywhere!!

The next post catching you up will take you through the final steps necessary for us to actually start living at the house!!