I know what you're thinking... "Ali! You're crazy! You've owned your home for a year and a half!"

But do you know what makes you a true home-owner?

Not paying the bills.

Not even living in it can qualify you for that title.

The true coronation into home-ownership is when something goes wrong and you realize it's up to YOU to fix it.

This week, Jake and I have officially earned our crowns (and I think mine is a lot less pretty than I would have hoped it to be...)


We entered into the esteemed club through one of the most dreaded ways possible; a leak.

Yep! The house we have spent a year and a half tearing apart and putting back together had a leak a mere TWO weeks after we moved into it!

Two nights ago, I got home from work and was putting some things away in the kitchen while Jake was making dinner. I was cleaning off the make-shift counter top in front of one of the windows when I saw the drip.


I looked up, and to my utter astonishment, I saw that there were a number of sections of the wood frame surrounding the window that were wet.

Okay. There went our plans of working on the bathroom that evening.

Since I knew there was nothing but snow and sky above the kitchen ceiling, I figured a good place to start the investigation would be outside. I stole Jake's rubber boots (since mine are still at my parent's) and climbed the ladder to check out the gutter situation.

Excuse my garbage photos. I didn't start taking pictures until Jake reminded me I should and my fingers were frozen a bit by that point. 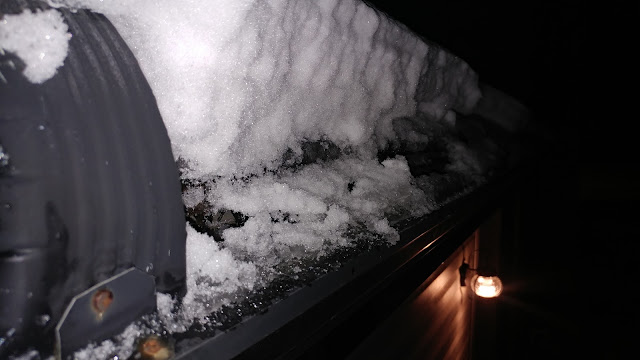 All you really need to know is that the gutters were completely full. And most of the water in them was frozen solid.


That wouldn't be the absolute end of the world except for the fact that the weather turned milder recently and clearly the water wasn't going out its intended channels.

I figured, if I could clean out the gutter, the problem would be solved.

So that's what I did!

Through a combination of stabbing the ice with a screw driver and hot water brought out by Jake (I tried using the heat gun for a bit but that just got tedious), I was able to clear out the whole thing.


And when I went inside to check out the leak I was thrilled to see that it had stopped!


The leak was back.

It seems as though it didn't stop. Only re-froze as the temperature dropped over night.

Jake took the reins this time when I suggest we go up on the roof and shovel that off. For some reason Jake gets all nervous when I talk about going on the roof.

Okay, sure... I MAY have told him that when I'm up high I often get that sensation to jump. But it's not like I'd ever actually act on it! I like myself WAY too much for that.


Either way... Jake went on the roof. He had me on hot water duty and in addition to shoveling off the roof, he decided to clean out the upper gutter as well.

Let me tell you one thing here; we have learned our lesson.

CLEAN OUT YOUR GUTTERS!

This was only the last small section of drain pipe that we cleaned out. Jake had previously taken a chunk out that was as big as his boot. (He tried to take a picture of it, but the camera on his phone is useless).

After all that, we THINK we solved the problem. The leak dried up immediately but tonight will be the true test. It has been 7 degrees (Celcius) all day today and rainy. I am hoping that tonight we can finally get back to work on the bathroom instead of working outside in the wet ice.

Here's hoping! (And here's also hoping that our street never gets as icy as it was last night. I spun around a complete 180 degrees trying to get down the hill to get into our driveway last night. Not fun... Our neighbour put a spray-painted sign up telling people not to go down the hill since it was all black ice. Scary!)