In which the completely inexperienced build a piece of furniture

It's official. You have been caught up enough that my blog can focus on specific projects in specific rooms without jumping all over the place.

Do you know what that means?

That means that we're working on the pretty elements!

The things you can see!

The things that aren't just structural or, you know... necessary.

The things that we WANT instead of merely need.

These are the things I started a blog for. And these are also the things I haven't been able to really talk about pretty much since I started said blog.

So buckle up and prepare to be wowed by our DIY prowess (or, enjoy laughing at our expert level struggle through the process).

First up, the bathroom! 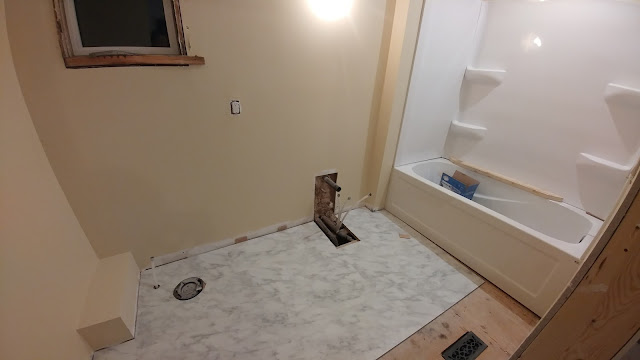 Flooring, walls, and tub were installed. As well as the toilet, though it isn't in this particular image.

Our next step was installing a bathroom vanity.

We knew we didn't want to spend a whole lot on it, so when my parents offered some old cabinets from their renovations we jumped at the chance. 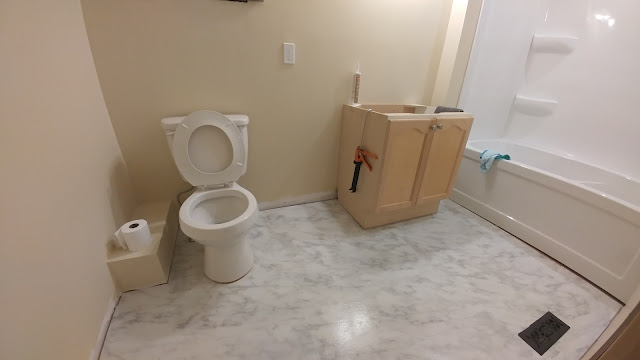 Like a dolt, I didn't take a picture of it, but there was a second piece that matched the cabinet above but was drawers. Originally we intended to use both pieces, paint them white, and build a counter top for them.

However when we got the two pieces into the room, the drawers were ridiculously too large. So we decided to use the cabinet, but build our own accompaniment to it to fit the space better. 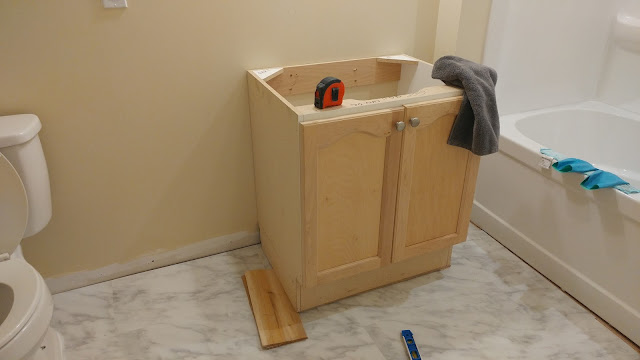 We leveled out the cabinet and permanently installed it so we could add the shut-off valves for the plumbing without any issue.

We then drew up some plans, tossed around ideas, and finally committed to just one. This was literally our first go at building a vanity but it was important to us that it LOOKED like it wasn't built by a couple of amateurs. This meant that even though it would be painted white, our plywood had to be "good one side". 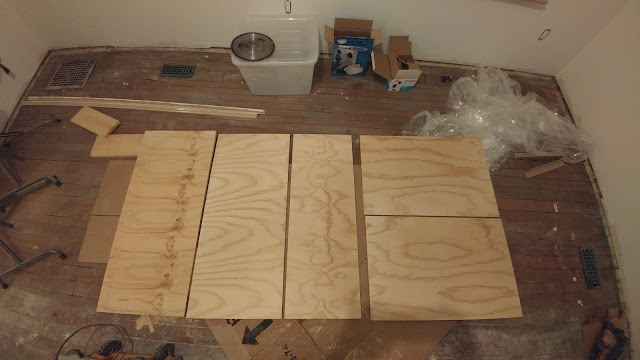 Style-wise we knew exactly what we wanted. During our demo days, I was adamant about saving as much of the original flooring as was reasonable so that we could re-purpose it throughout the house.

I knew we couldn't keep them in use as flooring because I wanted a more uniform look across the house and we didn't have enough to repair all the damaged spots.

The bathroom vanity became our first re-purposing project for the floors! We ultimately decided that the original flooring would be the focal point by way of counter tops.

So in designing the side cabinet, we opted to keep it simple. An open cabinet with a shelf to match the future counter top. 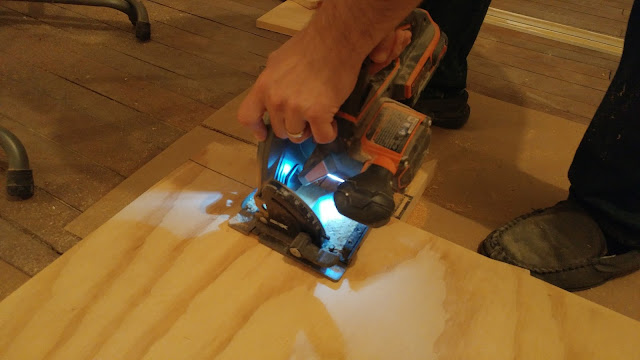 We measured everything a million times and dry-fit it in place as often as we could before committing to more permanent steps like cutting. 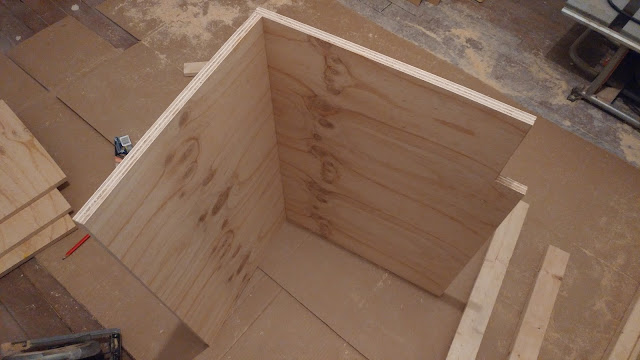 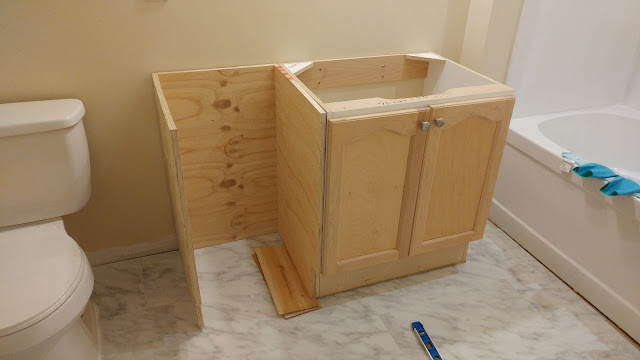 With just the basic shell in place, I was already pleased at how proportional the vanity suddenly looked in comparison to the space. 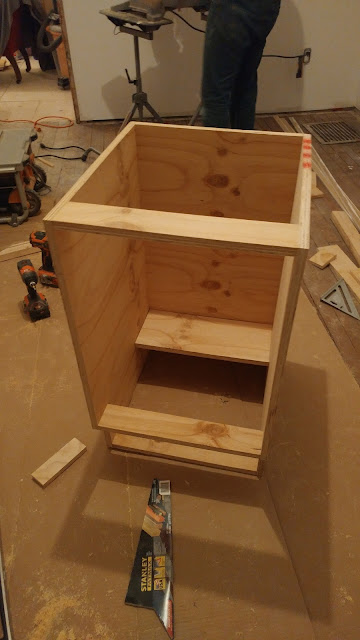 Initially we had intended to create two shelves for it. But after endless shopping and differing opinion on what we should have for a towel bar, Jake had the brilliant idea to incorporate the towel bar into the vanity itself. 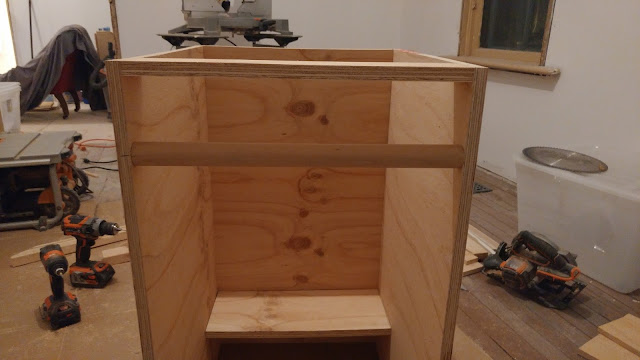 I loved this idea. Not only was it practical, but it would become a feature in and of itself!

As luck would have it, we already owned a dowel that was the perfect thickness. The idea here was that the whole cabinet would be white, except for the counter top, the shelf, and the dowel. Those would all be a stark contrast to the white with their rich stain and glossy finish. 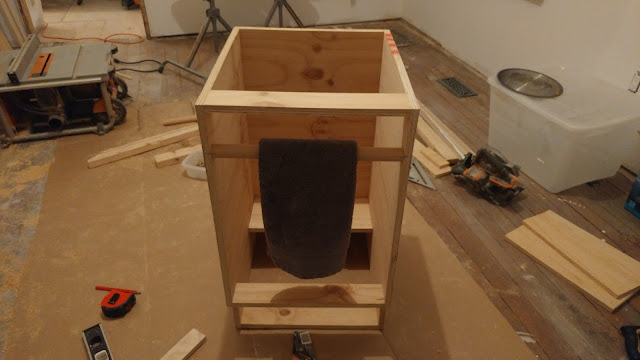 Over the Christmas holidays I worked on painting the cabinet. 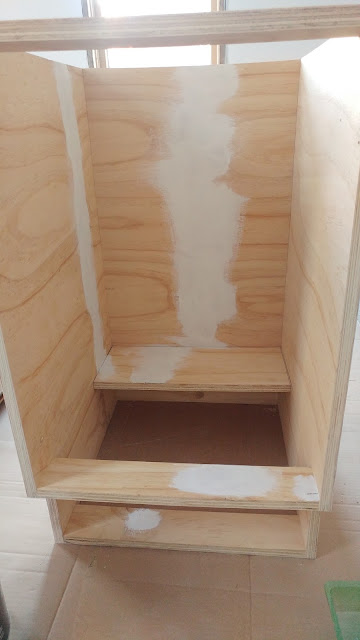 Painting tip: if you are painting wood with any knots or grain, make sure you use an oil-based primer. If you don't, the knots and wood grain will bleed through the water-based paint within as little as a few months.

For extra measure, I went over all of the knots first, then primed the entire thing. That way the knots would have two coats of primer on them and would be a lot less likely to bleed through my paint. 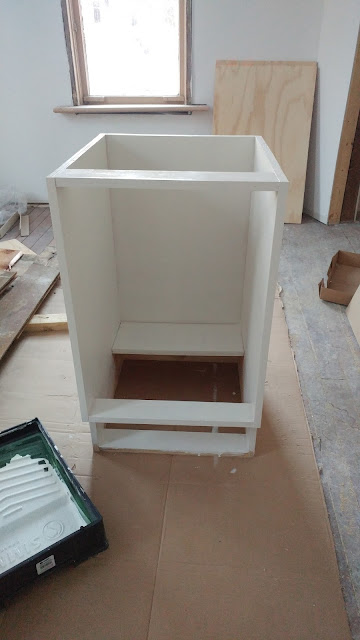 Finally it was installation time! 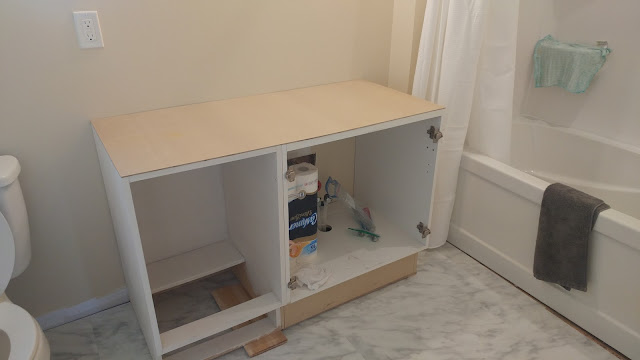 I loved how quickly the two pieces began to match one another. Our vision was starting to come together!

Oh and the electrical outlet suddenly made sense where it was (which is always a good thing).

My next post will go through what it took to turn this: 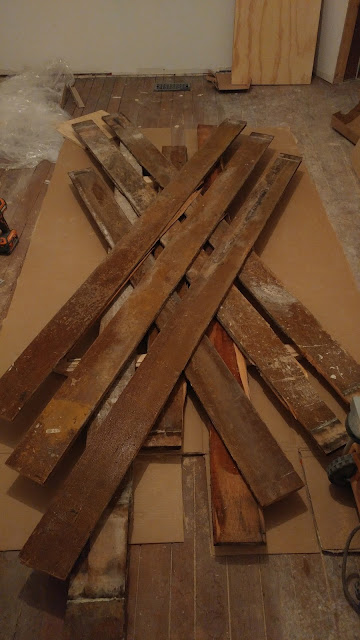 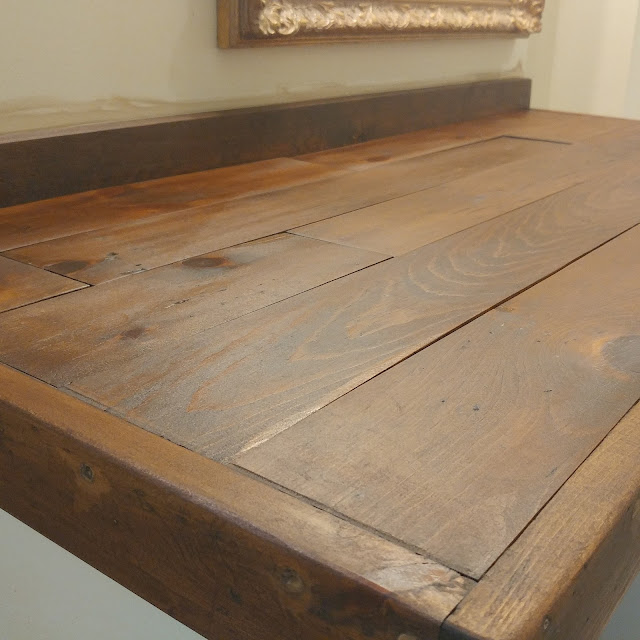