A back-breaking, hair-pulling kind of project


Anyway, let's get right to it.

I had two weeks of vacation over the Christmas holidays that I took specifically with the intent of getting work done in the house.

I was SO productive.

I mean, a DIY-renovator-with-a-million-projects-on-the-go crossed with perfect-housewife level of productive. 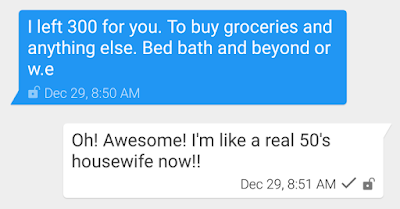 During those incredible two weeks, I got to work on the vanity counter top. I somehow had to take a pile of heavily abused original flooring and turn it into a gorgeous focal point in the bathroom. 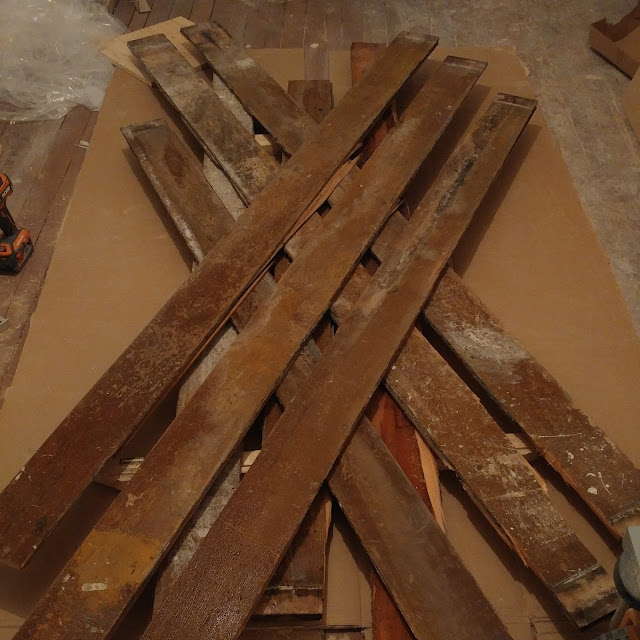 One day while Jake was still home on vacation with me, we selected a number of pieces from the pile under a tarp in the backyard. We brought them into the dining room and stacked them in such a way that air could hopefully get to them and dry them off sufficiently.

Then we started playing around with the counter top design. We looked for interesting details in the wood and laid them out in a way we thought might look good. Then, without a real plan, we started to cut the lengths.

It was basically me just handing Jake pieces and him saying "here?" and me saying "no, shift it to the right a little bit... yeah! there!". From there I would take the cut pieces and fit them together like a puzzle piece. 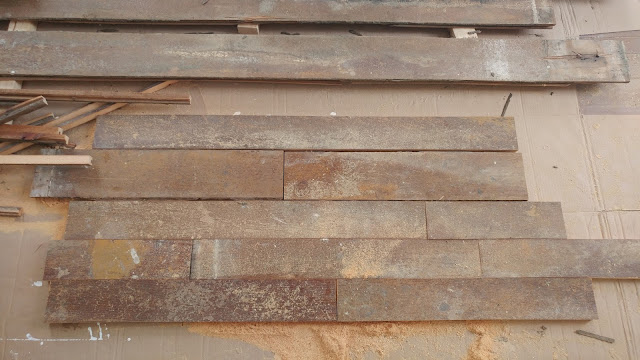 Alright! It's starting to resemble something like what was in our heads!

The next step was to cut the splintered tongue and groove (every single piece was damaged in SOME way because we were not particularly careful when removing it from the floor joists). Originally we had planned on just cutting the damaged bits off but then the more I thought about it, the more I realized it would be easier to just cut them all the same width so that we didn't end up with one teeny tiny piece in there somewhere. 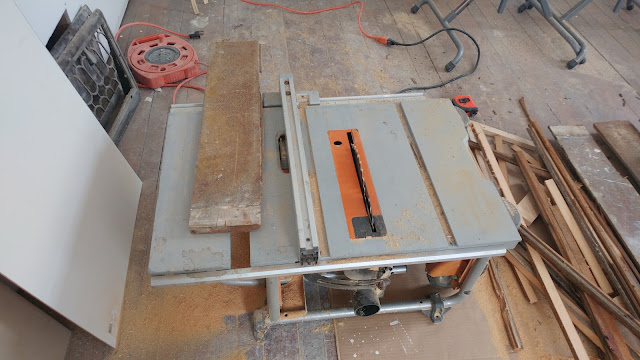 This was a decision made from the desire to get it done. In truth, I wanted them all to be different widths to make it crystal clear that they were original floorboards. But it would have taken a lot more time, a lot more trial and error, and - the worst element by far - a lot more math. 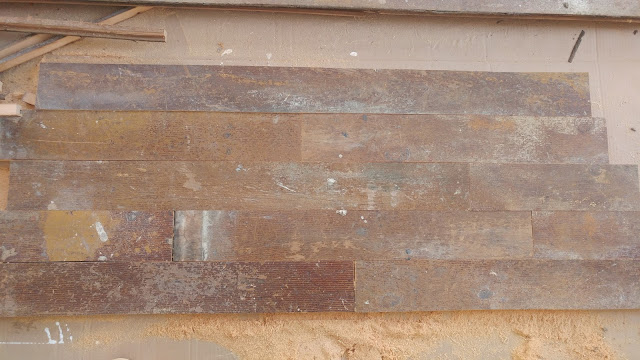 And so, Jake's vacation ended and I was left with the task of sanding down this mess.

At first I was excited. I'd been looking forward to sanding down something and re-staining it for a while.


Well let me just tell you that my excitement waned pretty darn quickly...

It was really satisfying, but man was it MESSY! I had saw dust everywhere. I was wearing a mask but it seemed to barely even matter. 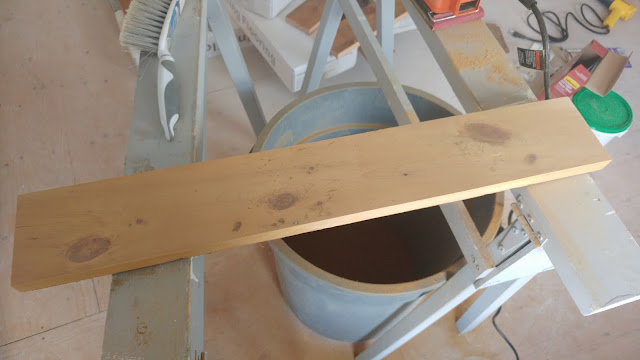 And then I suddenly hit a point where I just couldn't get any farther. My sandpaper kept falling off, and I couldn't for the life of me get a final bit of alligator texture removed. This was the back-breaking part of this project... 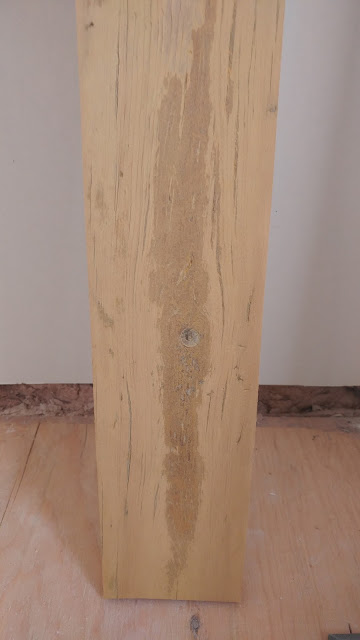 Just when I was on the verge of cursing and giving up, I thought "hey... maybe the new sandpaper we bought would work better than the stuff that just came with the sander". 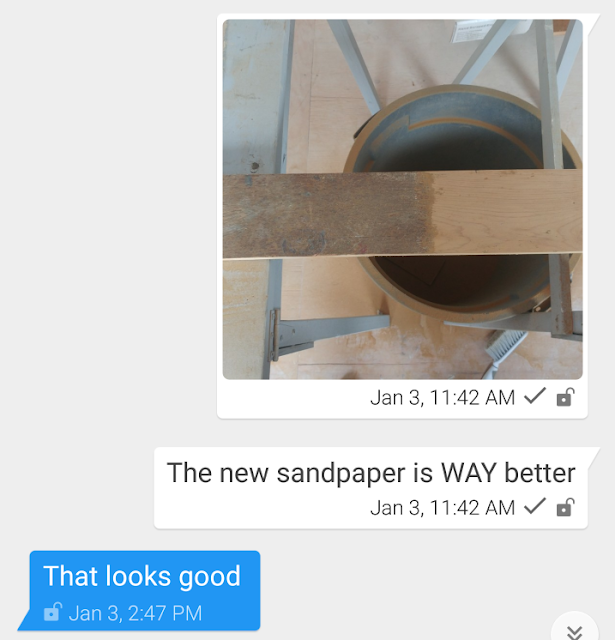 So once again it became satisfying work.

It took me a few days to get all of the pieces sanded down and looking like the beautiful old-growth wood it was 128 years ago. 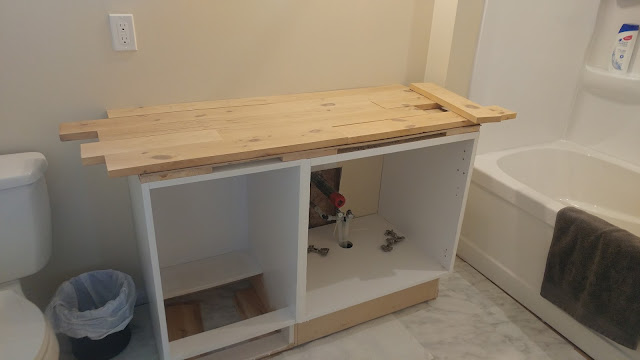 As we played around with the layout and what we assumed would be our final design we made the decision to raise the counter top slightly just so we could trim it out without hindering the cabinet doors from opening. You know, in case we ever wanted to actually use the cabinet... 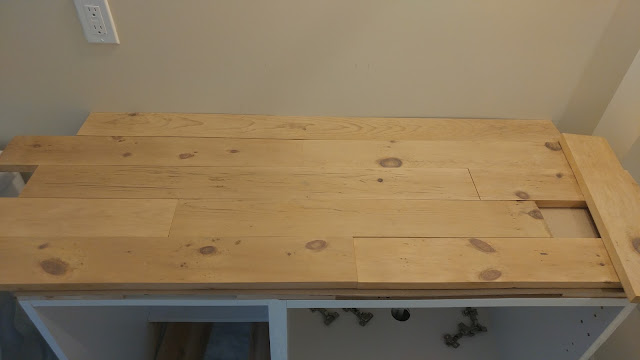 I loved that you could suddenly see all the wood grain and the knots and the general oldness of the wood. There are several spots that if you look carefully, you can see old nail remnants. Those were the elements of character that I loved.

I never wanted the counter top to look new, I was more interested in having it look like it belonged.

And then, of course, I wanted it to function LIKE it were new.

That wasn't asking a whole lot was it?

In between sanding sessions, Jake and I started playing around with finishes. We sanded down a few extra pieces to use for our trials and selected our conditioner and stain colour.

Our choice of colour turned out to be exactly what I was looking for and the wood drank it up enthusiastically, which made application easy. 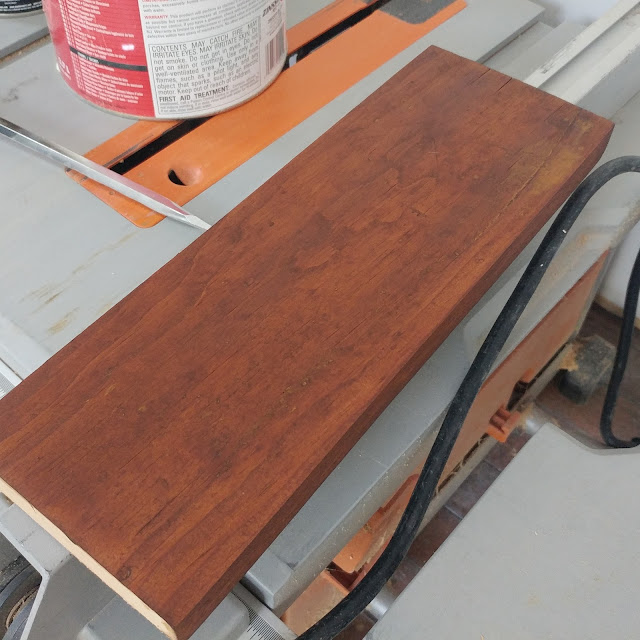 Our thought process next was to stain each piece individually so that the colour would get right down into the cracks between pieces.

1. Wash the bare wood clean and let it dry. 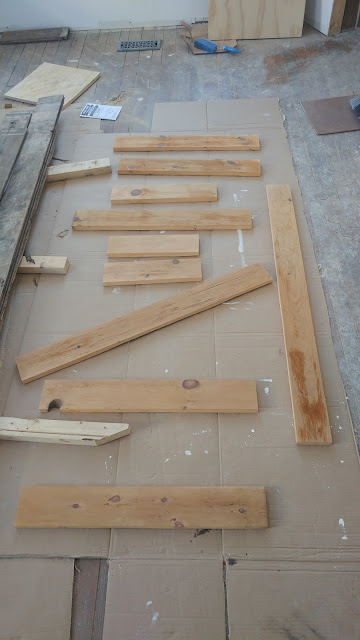 2. Use the wood conditioner and let sit for 30 minutes. 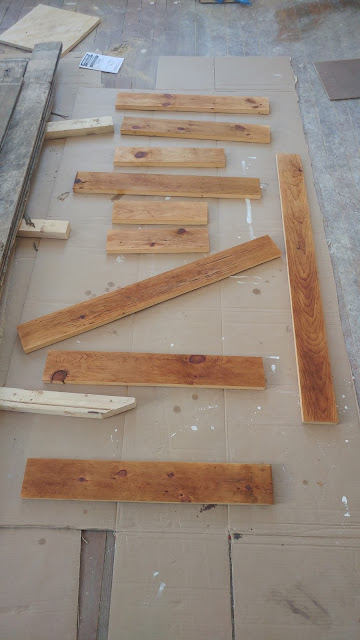 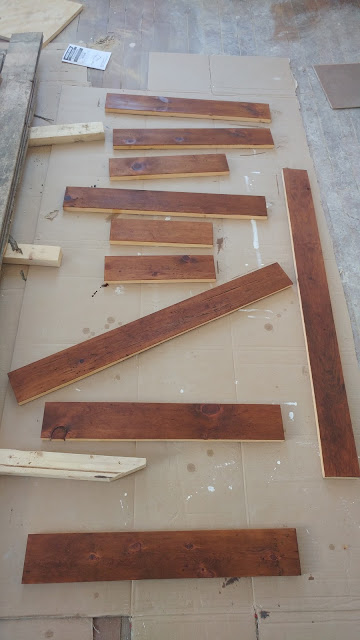 I loved it! The character in the wood gave the colour so much depth and richness that I was totally enamoured.

So here is where the hair-pulling element of this project truly begins.

We were stupid. We do not have clamps. Nor did we think it necessary to get clamps. Or even borrow clamps.

I repeat; we were stupid.

So we decided to get a thin piece of plywood, cut it to the correct size (line it up on the vanity and measure in place), then affix the wood to that piece of plywood. Then hopefully just install the counter top in one glorious piece! 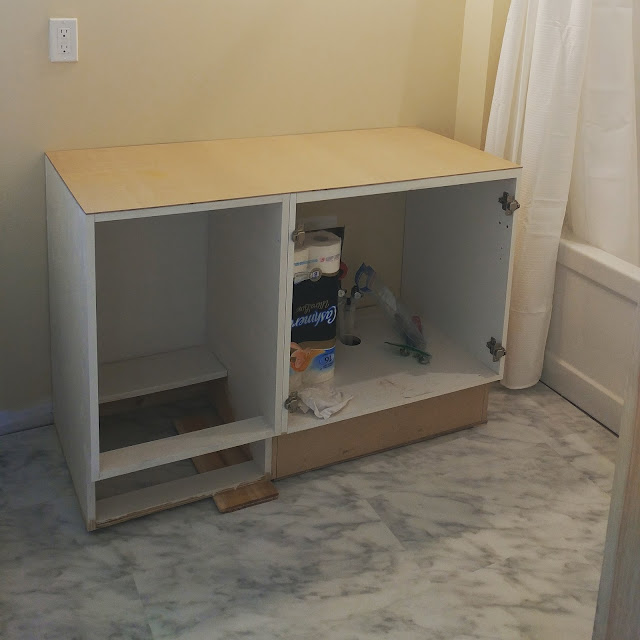 So this is what we did. 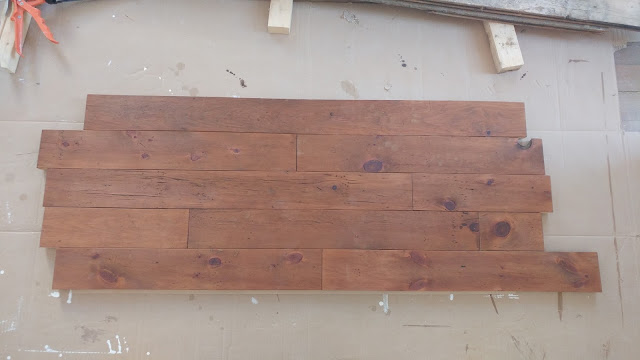 We glued each board with wood glue and then nailed them to the plywood on the back side with finishing nails for extra measure.

Problem #1:
- our measurements were off with the width of each piece of wood. 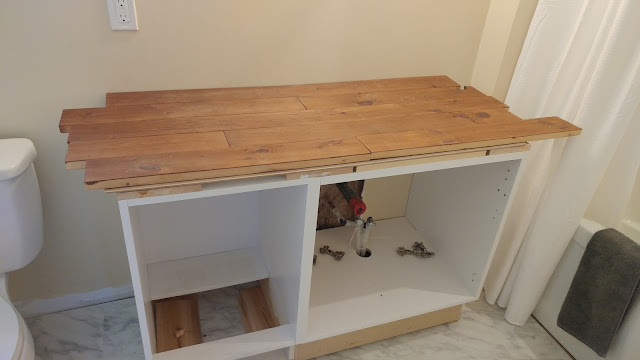 Yeah. The whole reason I lost the random-width boards was for accuracy's sake and our measurements were off....

In the above photo you can see a little lip of the plywood sticking out. This meant that our front trim piece would either end up on an angle (absolutely not) or we'd have to notch it to fit (pain in the rump!). 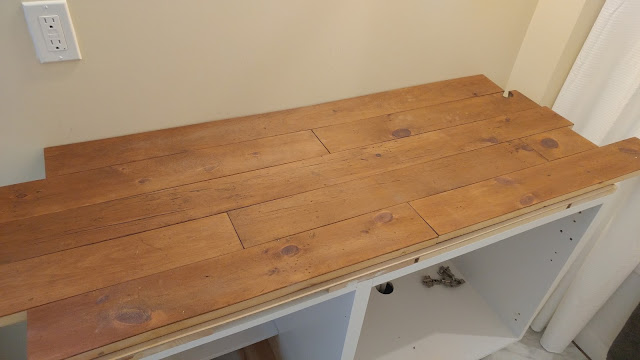 Aside from that I was pretty excited by how it was turning out. In the actual bathroom, the stain looked a little light for my taste, but that would have been an easy remedy with a second coat going on before we added a clear coat.

And Jake even came up with a great solution to the measurement issue by thinking to just add a back-splash in the same wood. So we cut down the lip of plywood (how? VERY CAREFULLY), added a piece for the back-splash to see if we liked it, and then I made Jake hold up an example of front trim and the faucet... because... preeeetty. 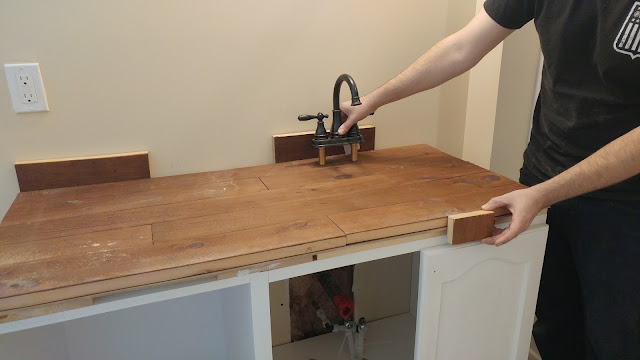 Alright! We were back on track!

Problem #2:
- we left it uninstalled too long. In a bathroom. Aka a room we take showers in. Aka a room that gets humid....

It curled. And expanded. And pulled the seams apart. And lifted edges so it wasn't smooth anymore. And generally became a right old mess.

So we tried sanding it down to make it smooth again. 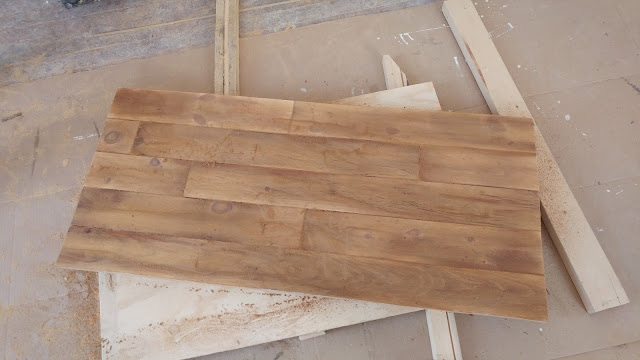 And that kind of worked.

Worked enough for me to say "sure... it doesn't look like crap" (Always a good statement to say when making custom-anything)

So then we got all of our pieces together again and realized that nothing really was going to fit correctly. I was so happy that we were coming to the functional (remember, we were washing our hands in the tub at this point, and I was doing my hair and makeup using a hand mirror that I stuck between my legs, or occasionally made Jake hold for me) and pretty end.

And then we did the unthinkable.

We tore it apart to start again.

If we were more emotional people it probably would have been tear-inducing.

But it was necessary. We had made so many concessions to it along the way and could see that there were more we were going to have to make (none of the trim pieces would lay correctly and would have had to be notched. All because we just didn't do it right).

We had a brief moment of sunshine that the rain clouds decided to crap all over us.