If you follow me on Instagram you'll have seen that we're picking up a bit of speed with regards to projects around the house.

But instead, I have been a lazy bum who is still rambling about a vanity that was started in December... DECEMBER!!!!!!!! (And consequently was finished - a term here used loosely - in April)

So today, I came to the conclusion that I must get on with it and become a relative writing machine.

All in the hopes that I don't lose steam and can fill you in on the banister project upstairs (yay!).


We last left off  with the bottom shelf being completed.

This shelf became our hope. It was the light guiding the rest of our horribly derailed project through a dark and rather depressing tunnel. 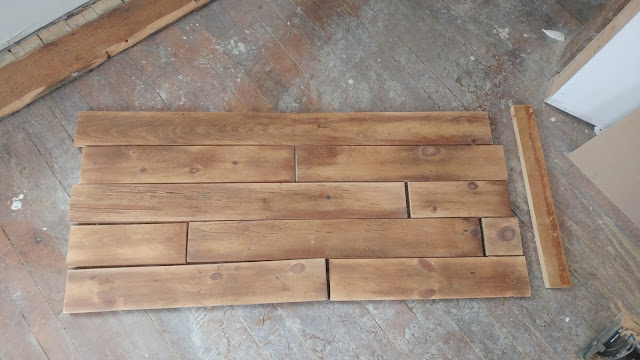 Having torn the counter top off with the intent to reinstall it, we went back to laying it out on the floor and to see if it would actually work.

The main difference in our installation process this time around was avoiding the thin piece of plywood entirely.

It made it difficult to install, but we screwed each piece of wood in place directly to the cabinetry below. 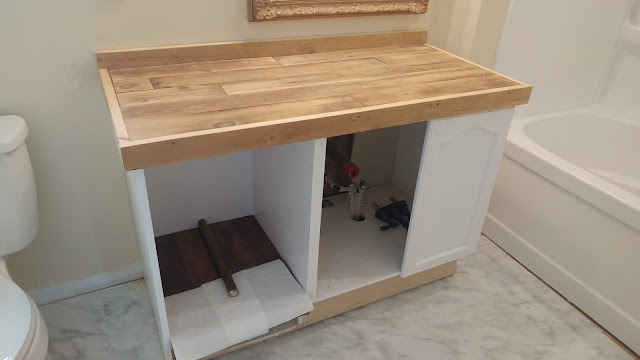 This worked way better. We also made the decision to screw the front and side edges in place so we'd never have to fear them coming lose. It is a bathroom vanity after all, it would get constant (and not always very kind) use so it was very important to ensure it could withstand it. 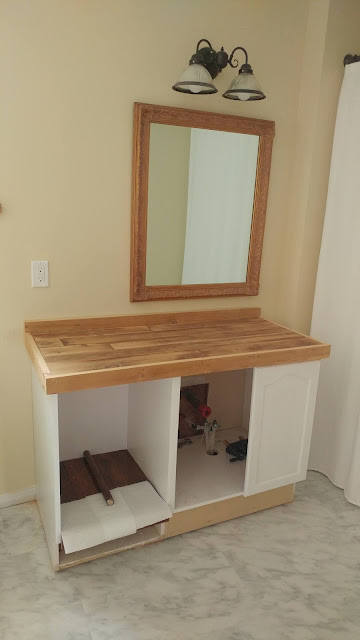 It was somewhere before the Great Frustration that I demanded the mirror get hung up too. I was tired of doing my makeup with a hand mirror...

We got the mirror for free from my parents who have had it for years. It didn't make the cut in their new home and was sitting in the barn collecting dust.

INTERJECTION:
See the light in the above photo?

That is the light I originally wrote a post about back in April... April 2017 that is...

I never filled you in. Because it sat unfinished for so long. And then when I did finish it, it was installed pretty much immediately.

But our electrician accidentally dropped it and broke a piece off when he was installing it, so I knew I had to replace it. Which I have since done.

So, I never followed up on that light ever... I will do so now just to show you that ugly, dated things can get new life (as long as they aren't dropped from a step-ladder of course). 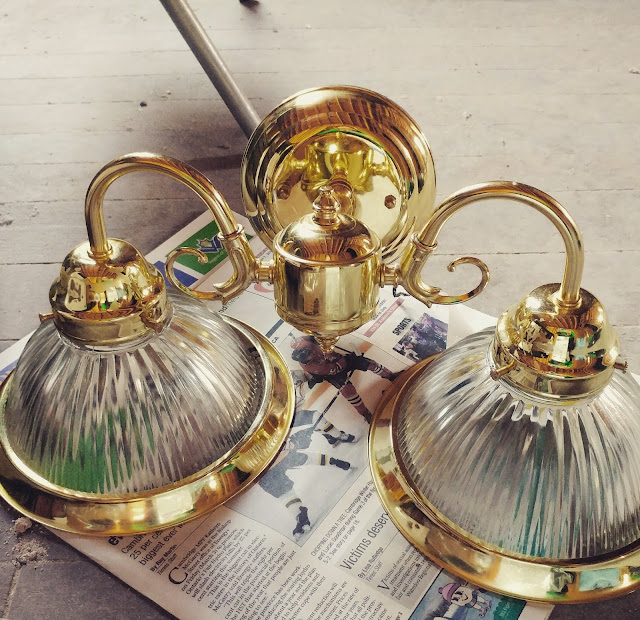 I took it apart, sanded it down and taped the electrical. Then it looked like this: 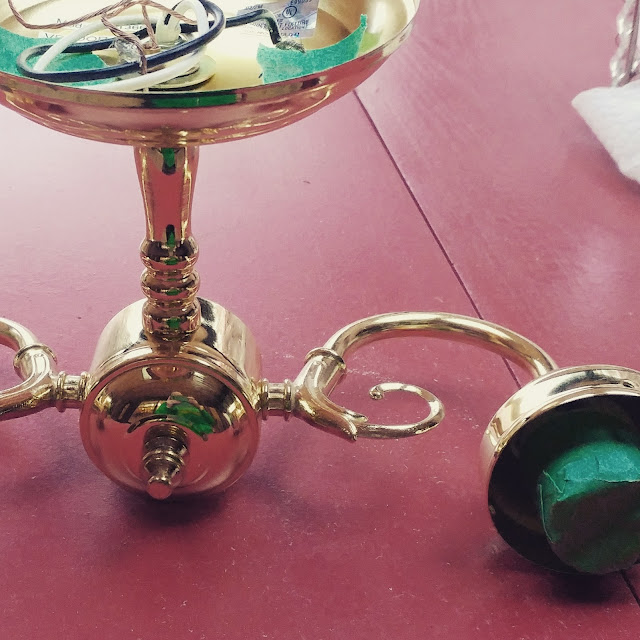 Then I spray-painted it oil-rubbed bronze and it looked like this: 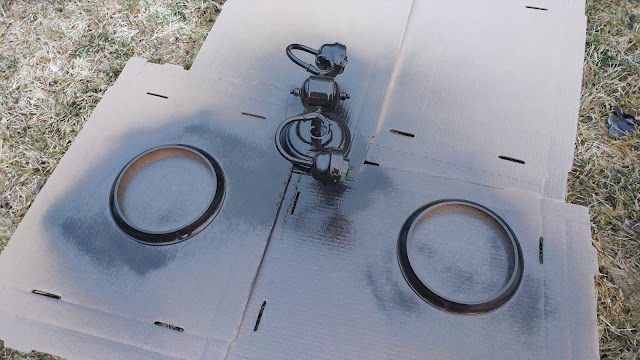 After it was dry, I put it back together and it looked like this: 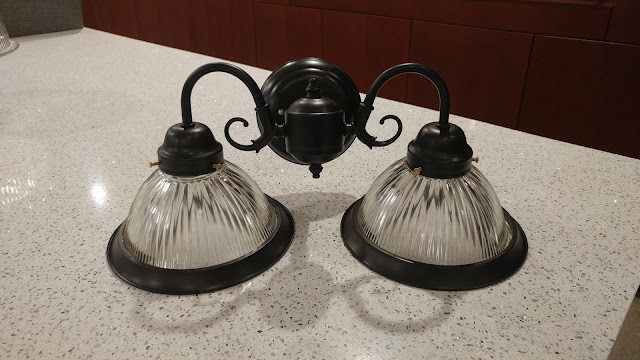 A far-cry from its original state. And I loved it. I loved that it looked like it belonged in a 1920's lawyer's office or something.

I also loved that even with paint, it cost me less than $20.

And then it broke.

And I had to find a new one.

I did a poll on Instagram asking if anyone liked this light: 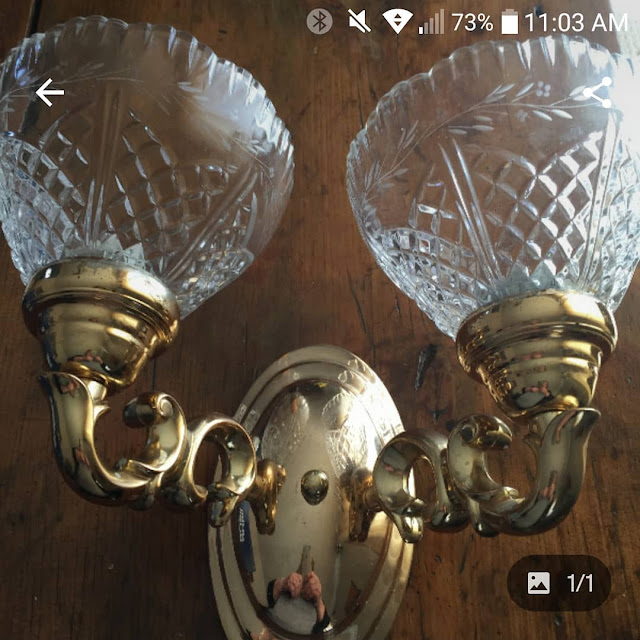 Almost no one liked it.

But I bought it anyway, painted it, and turned it upside-down.

This light was not dropped during installation (yay!) and it turns out that I love it even more than I loved the first one (this was also under $20). 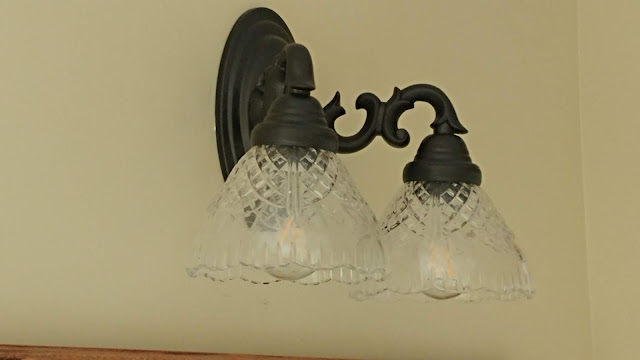 It's obviously a lot more feminine, but it also genuinely looks old, not like we're just pretending. 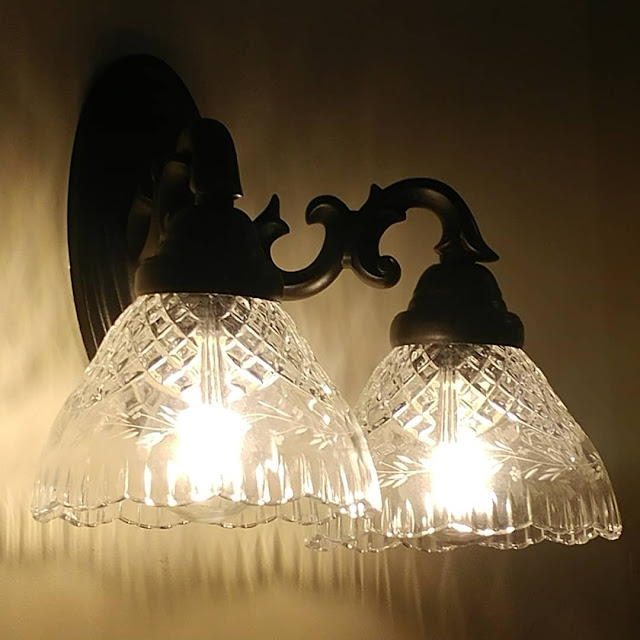 The shadows it casts on the walls are FANTASTIC! 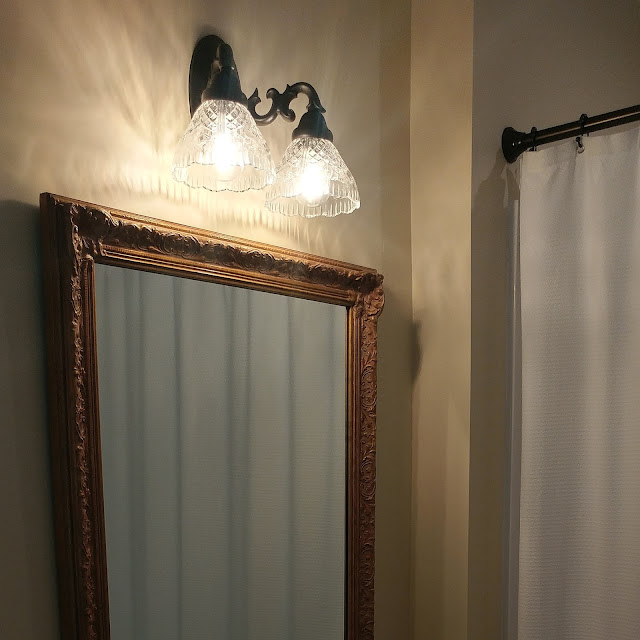 Anyway, back to the vanity...

Once the counter was installed, we sanded it down and got ready to stain it.


We were officially at the same point in the counter build where we tore it up last time.

Except now, we were so happy.

It was officially sink time!

Originally we had purchased a sink from an auction that we intended to use in here.

Funny story: the only reason I bid on the sink was because no one had and it was about to close. It wasn't stylistically what I would have considered under normal circumstances, but $5 was too good of a bargain to ignore.

But when we purchased our faucet, we didn't take into account the drain size of our sink. Which cannot support the width of a push-stopper.

We even tried to file away at the porcelain to made the drain fit. But nothing worked.

So we had to buy a new sink (And paid full-price... which was somewhere around $150 if I remember correctly? (Depressing because I just checked online to see the price and it has dropped to $82.98... *sigh*)

Anyway, we measured and cut the hole for our new sink. We dropped it in place and set the faucet in its designated position just to see how it would all look. 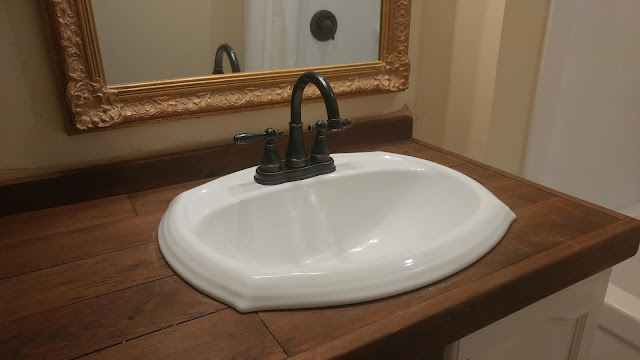 I was in love. 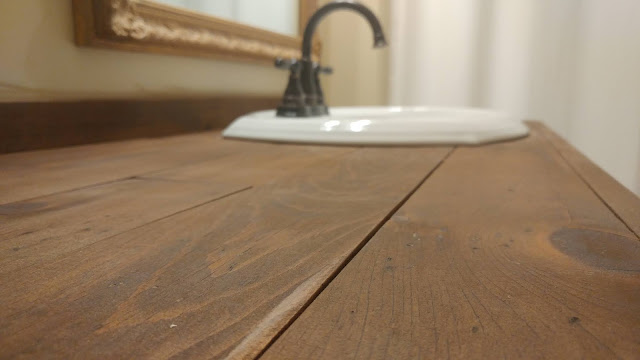 Next came the glossy clear coat. This was another one of those steps that was really satisfying because it brought out the depth of the stain and the beauty of the wood. 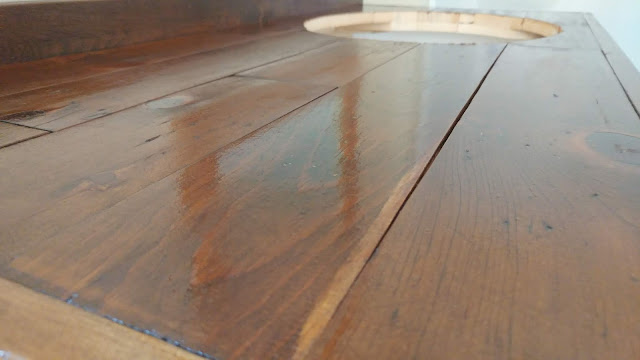 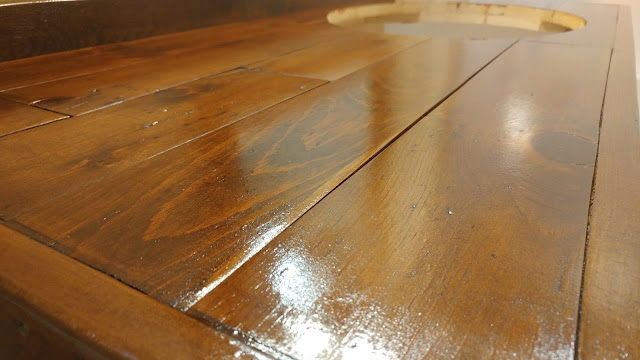 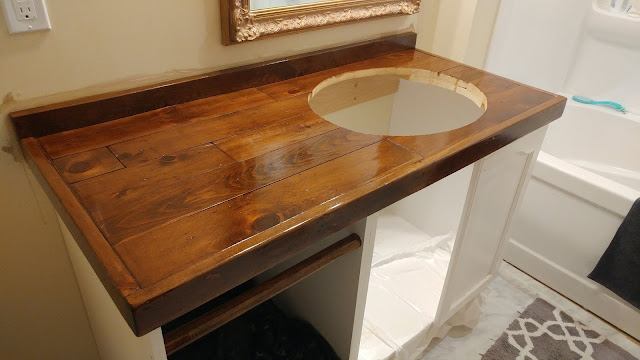 After three coats (sanding with fine sandpaper in between each coat) I was very satisfied with how it turned out.

Also, ignore the stains on the wall. I was very liberal in my application because we have to touch up some spots on the walls anyway and I wanted to guarantee that the backsplash was coated completely.

The sink installation went really smoothly and I was totally and completely elated when I was able to turn the tap and have water come out.

No more washing our hands in the tub!!! 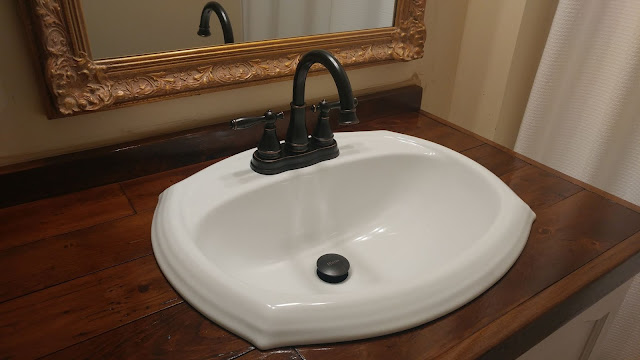 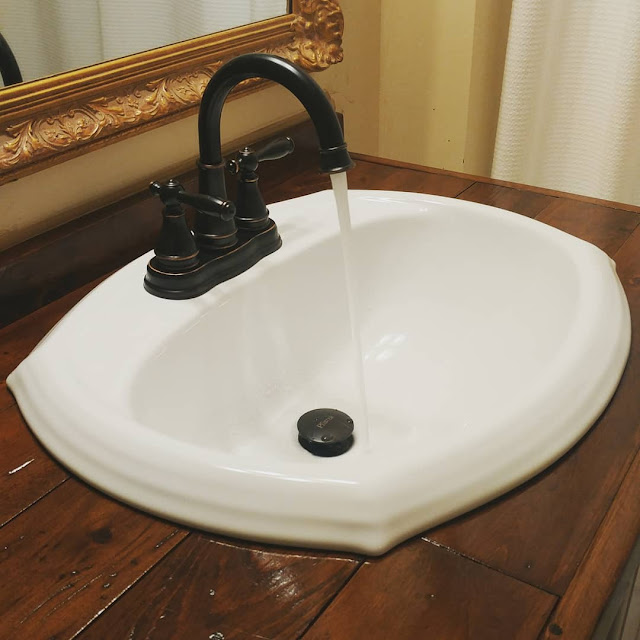 All that was left to do was install the towel bar and cabinet doors and it would be (practically) finished! 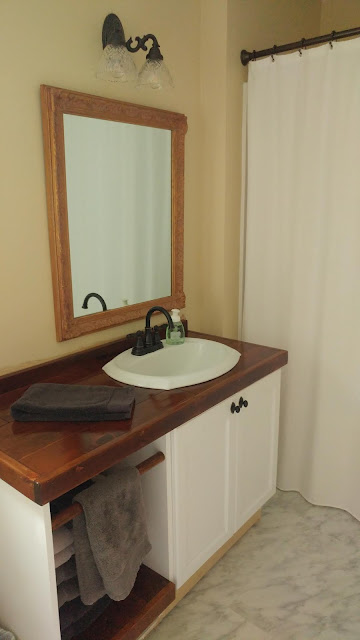 We used the same cabinet knobs as the kitchen (which I got for $5/package at an auction) and I love how it ties everything together. 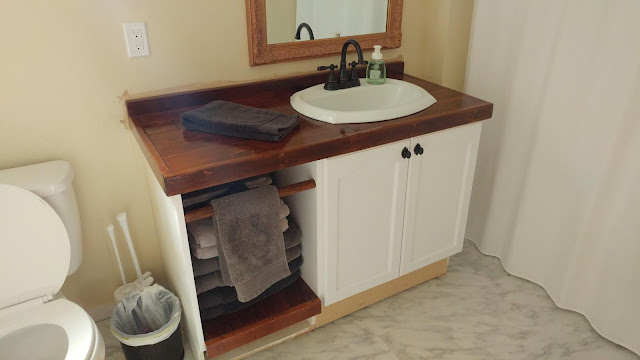 We still have trim to add of course, but that is waiting on a few other elements. 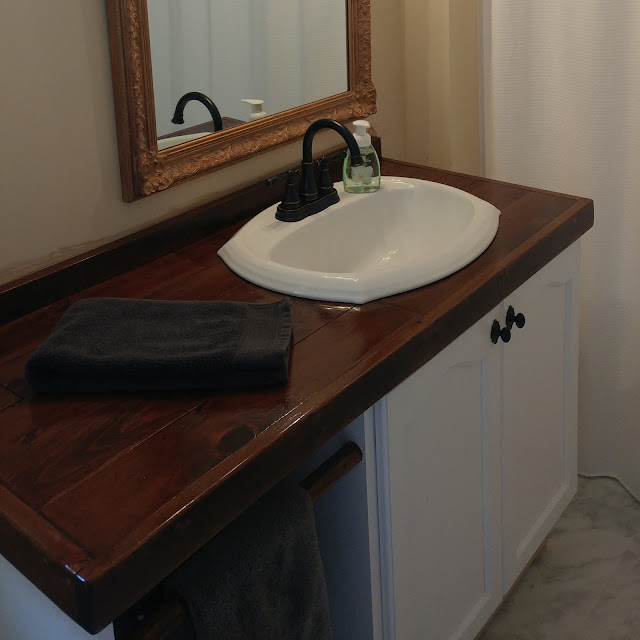 We've been using it for a few months now and the counter has held up immaculately. It is a breeze to clean and is taking to the constant water spillage with ease.

I LOVE the "linen shelf" we created. It's awesome having all our towels together and because it is an open shelf, they never get that closet smell. I know you know what smell I'm talking about...

I am so proud of this piece for so many reasons. Most of all, the fact that we were able to take something original to the house and give it a new lease on life while also turning it into a functional show-stopper (in my humble opinion anyway).

The bathroom is not finished yet, we're still using a sheet as a door because we haven't planed down the original door that is going in here. We have some caulking repairs and need to add trim, and of course we have to build out the window frame for our custom piece of stained glass.

But this room is officially functional and is coming along so nicely.